Frame by Frame: A Powerful look at Photojournalism in Afghanistan 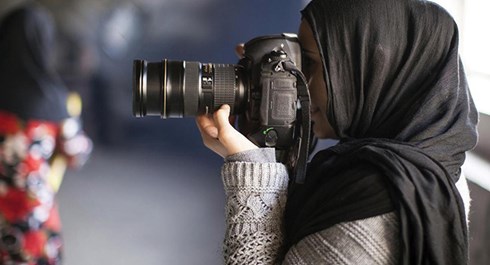 In one of the film’s most devastating scenes, Frame by Frame takes us to a hospital in Herat where photojournalist Farzana Wahidy attempts to take photos of female patients in a burn victim unit. The patients purportedly self-immolated but in reality were set ablaze by their own husbands and family members. The chief doctor, while initially helpful, becomes increasingly ill-at-ease to cooperate with Wahidy and ultimately refuses to allow her to continue her work. The doctor became concerned that word of Wahidy’s sensitive work would get out and could reach the leading Imam in Herat. A woman photographing female burn victims would be considered a gross violation in the highly patriarchal Afghan society and could lead to the destruction of the hospital and risk the lives of the medical staff. It is this kind of instability and danger that undermines an otherwise bourgeoning media landscape in the country.

Frame by Frame, directed and produced by Alexandria Bombach and Mo Scarpelli, follows Wahidy, her husband, Massoud Hossaini, Wakil Kohsar and Najbullah Musafer as they crisscross Kabul and the rest of the country attempting to document Afghanistan’s tortured road to recovery from decades of war.

The film delves into the personal journeys of these brave and talented photojournalists and explores their passion for photography as well as their homeland. As the audience follows them on their trips to the field, you get a sense of the devastating challenges facing Afghanistan. Sectarian violence, the subjugation and abuse of women and the seemingly endless economic and security hardships make the film difficult to sit through, but the resilience of the photojournalists and their relentless pursuit of the truth provides a glimmer of hope.

Frame by Frame demonstrates that even in the most difficult environment, there are talented and passionate journalists attempting to shine a light on some of the darkest corners of society. But with a lack of governance, rampant violence and instability, these talented individuals are constantly under threat and at risk. As the US military presence fades in Afghanistan, it is crucial that the international community continue to work toward a political, economic and security environment in Afghanistan that allows the work of these incredible photojournalists to continue.

Frame by Frame will be screened across the country and around the world over the coming months. Check out the film’s website to see where a screening might be playing near you.