An Explosion of News: The State of Media in Afghanistan 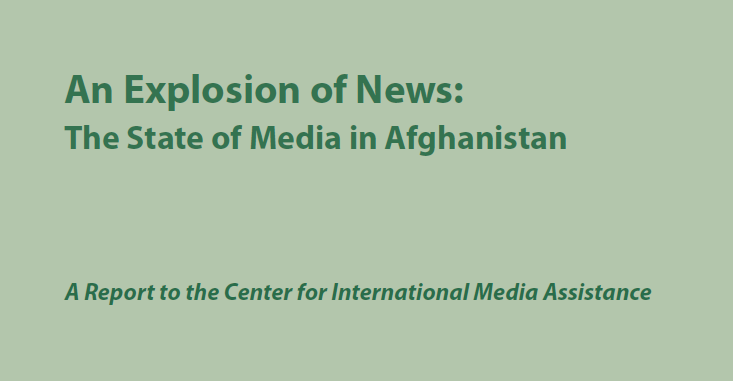 CIMA is pleased to release a new report, An Explosion of News: The State of Media in Afghanistan, by Peter Cary, a veteran journalist. Since the fall of the Taliban regime in 2001, when there was virtually no media in Afghanistan, the country has seen an eruption of media development. There are now 175 FM radio stations, 75 TV channels, and hundreds of print publications, the majority of them launched with U.S. support. Afghans have come to embrace the offerings of the new outlets–especially their entertainment programs–and have become avid but also wise consumers of news and information. But the future is uncertain. A modest number of outlets are able to sustain themselves commercially, but many still depend on financial support from the Afghan and U.S. governments. Meanwhile, the media and their journalists face content restrictions from their own government and physical threats from police and security forces, from warlords, and from the Taliban insurgency. To many, the idea of an Afghanistan with no independent media is now unthinkable, but it will take a broad and concerted effort to make sure that does not happen. This report describes and analyzes the evolving landscape for media in Afghanistan.

Media Ownership in Bangladesh: Why More Media Outlets Does...

By Ali Riaz and Mohammad Sajjadur Rahman Bangladesh's media ecosystem paints a contradictory picture. On the one hand, the country's media sector has witnessed significant growth in the past two decades. On the other hand, media freedom in the country is steadily declining. In 2020, Reporters Wi...