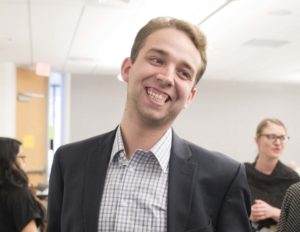 Aleksej Demjanski is the Assistant Program Officer at the Center for International Media Assistance (CIMA) at the National Endowment for Democracy. In this role, he builds and maintains partnerships with individuals and organizations working in media development, leads CIMA’s regional consultations, and supports CIMA’s research and publications efforts.

Aleksej holds a Master of Global Policy Studies from the LBJ School of Public Affairs and an M.A. in Russian, East European, and Eurasian Studies from the University of Texas at Austin. His research and policy interests are at the intersection of corruption, social movements, and media with a focus on Southeast Europe (Balkans).

Prior to joining CIMA, he worked as a Communications and Social Media Assistant with the Southeast European and Black Sea Studies academic journal at the Hellenic Foundation for European and Foreign Policy, was a Fulbright researcher in Romania and Bulgaria, and held brief research and policy positions with the National Democratic Institute in N. Macedonia and the Strauss Center for International Security and Law.