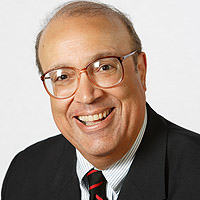 Adam Clayton Powell III is Senior Fellow at the Center on Communication Leadership and Policy at the University of Southern California, developing initiatives on public service media and arts journalism. Powell is also working with the USC Annenberg School for Communication and Journalism and the USC School of Policy Planning and Development on a series of forums and research meetings focusing on communication, technology, development, and policy. He is also a Senior Fellow of the USC Center on Public Diplomacy.

Until fall of 2010, Powell served as USC’s Vice Provost for Globalization, working with faculty and deans to advance the university's global initiatives, expand USC's international presence, increase USC’s leadership role in the Association of Pacific Rim Universities, and promoting the university throughout the world.

Powell previously served as director of the USC Integrated Media Systems Center, the National Science Foundation's Research Center for multimedia research, and before that spent several years as Vice President for Technology Programs at the Freedom Forum and Newseum, creating training programs and forums on digital media in Africa, Asia, Europe, Latin America, and the United States and on new media for journalists, media managers, educators and policy makers.

Powell is widely published, and many of his writings draw on his significant international experience. He recently contributed a chapter to America's Dialogue with the World and published a book entitled Reinventing Local News: Connecting with Communities Using New Technologies. He has also written for a number of publications, including the New York Times, Wired magazine, and Online Journalism Review.

Powell comes from a career of two decades in broadcasting, serving as vice president for news and information programming at National Public Radio; manager of network radio and television news for CBS News; executive producer at Quincy Jones Entertainment; and general manager of PBS stations WHUT-TV in Washington and KMTP-TV in San Francisco.

Powell has won numerous awards, including the 1999 World Technology Award for Media and Journalism, sponsored by the Economist, and the Overseas Press Club Award for international reporting for a series of broadcasts on Iran.