A Clash of Cultures: Hate Speech, Taboos, Blasphemy, and the Role of News Media 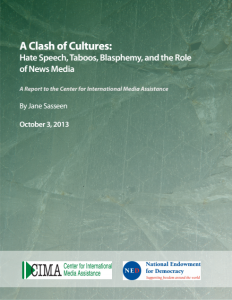 CIMA is pleased to release A Clash of Cultures: Hate Speech, Taboos, Blasphemy, and the Role of News Media, by Jane Sasseen. The ability of individuals to openly speak their minds is a core principle not only of American journalism, but American democracy. Even when speech is insulting or disrespectful to others-speech that might run afoul of hate speech laws throughout Western Europe or be banned outright in much of the rest of the world-it is generally permitted in the United States. But the rise of the Internet and the instantaneous global communications it enables have raised a host of new questions about how to handle hate speech and other potentially offensive speech when it can be seen by audiences in other countries that do not share those values.