Covering the Authoritarian Playbook: How Coda Story Gets to the Root of Global Crises 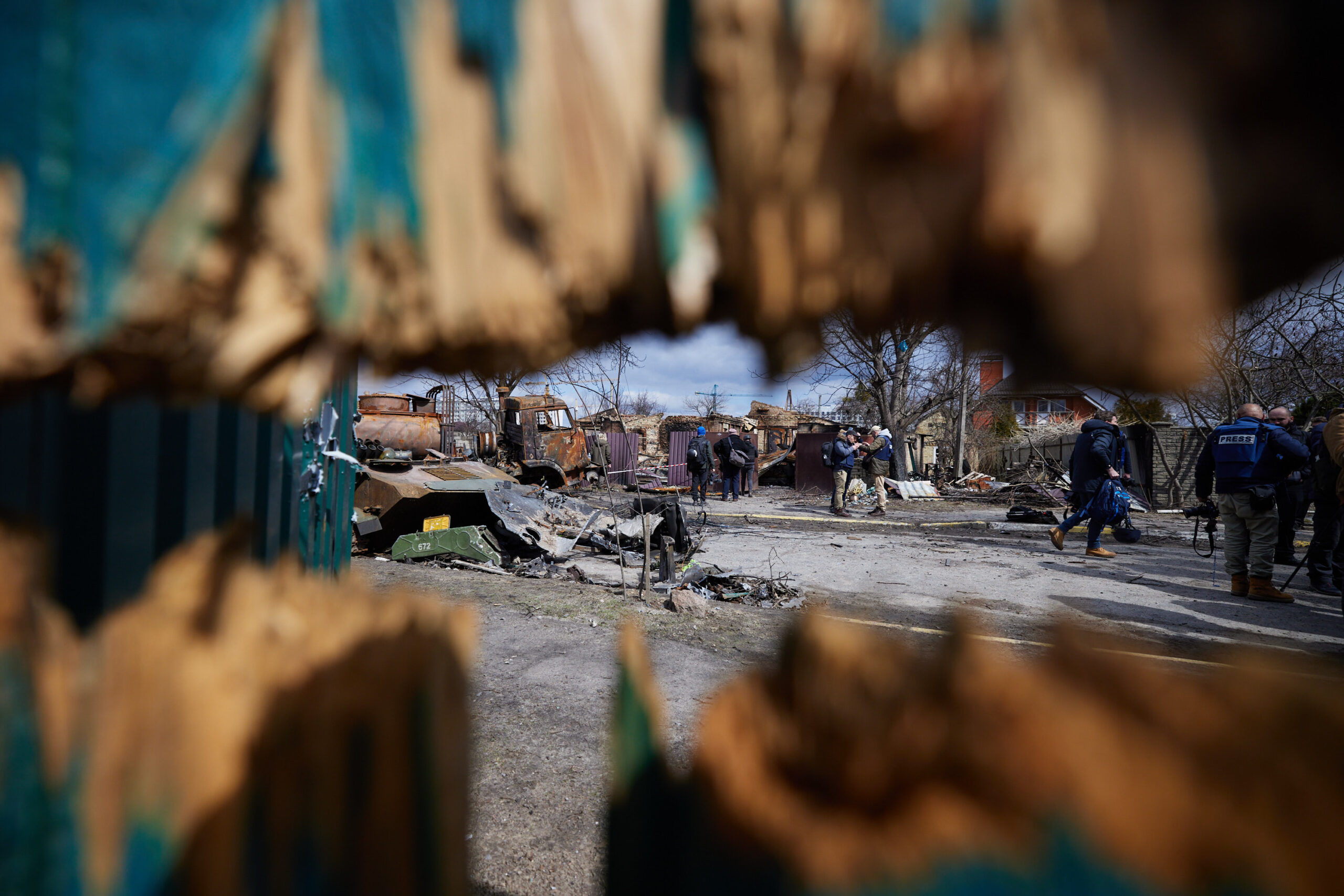 Journalists and civilians in the city of Bucha, Ukraine, in 2022.

For years, Russia has been refining its digital authoritarian playbook, taking advantage of technological advancements to silence the regime’s opponents at home and abroad. The information war that accompanied its invasion of Ukraine has shined a stark light on the corrosive effects of these strategies on the information space not only in Russia, but also in Ukraine and other neighboring countries.

Natalia Antelava, founder of the thematic newsroom Coda Story, said digital authoritarian populism is the greatest challenge to independent media. CIMA spoke to Antelava, who cofounded the online news outlet Coda Story in Georgia in 2016 with the mission to create a reporting method that examines the root causes of stories emerging from global crises. The outlet has been following Russia’s digital authoritarian tactics since its inception.

“Media is one of the biggest scapegoats of authoritarian populism,” said Antelava. She added that populism poses a different threat than media has ever faced before, allowing demagogues to sow doubt on critical reporting and undermine audience trust. She also notes that authoritarian networks are proving to be effective in collaborating and learning from each other in regards to repressive legislation.

Digital repression in the form of online censorship, automated surveillance, and coordinated disinformation campaigns has long been a hallmark of authoritarian attacks on internet freedom and freedom of expression. Because these challenges take place on international tech platforms, there is often little recourse for independent media whose content is censored or drowned out in a sea of false or misleading news. “One by one these voices get silenced and then we end up in an information space dominated by the noise generated by government propaganda and the trolls on Facebook,” said Antelava.

The Root of the Reporting

Coda Story’s thematic approach to reporting has served the outlet well in its coverage of the Russian invasion of Ukraine. Since its founding, the outlet has had a history of publishing stories on Russian influence in Ukraine as part of its reporting on disinformation and authoritarian technology. The staff’s deep expertise in Eastern Europe and the newsroom’s proactive nature in identifying stories and key trends that have a long-lasting effect make them well-positioned to cover trends in the information space occurring as a result of the war in Ukraine.

“We are tracking the ripple effects of this war on the region and the world,” said Antelava. “Staying on the story by interrogating it by these larger themes that we cover and showing the patterns that emerge from this war as other media lose interest.”

Coda Story was conceived to reshape the way media reports the news, said Antelava. The newsroom identifies a number of key global issues, which it follows over several years. Its current beats include disinformation, authoritarian technology, the war on science, and rewriting history.

“We wanted to figure out how to create a journalism process that stays on the story. How do you move away from treating information as incremental pieces of news and instead create a narrative that makes sense?” Antelava said. “We took a theme and looked at its root causes.”

For instance, the newsroom’s first reporting theme covered the LGBTQ community in Eastern Europe and Eurasia, from human rights abuses to the role of the orthodox church in fueling violence against LGBTQ people. For over a year, Coda Story covered this topic by exploring a number of subthemes, including the Kremlin’s attempts to frame sexual orientation as an issue of political ideology, and how tensions with the West influenced the fight for LGBTQ rights in the region.

Coda Story’s reporting highlights the financial pressures media face, not only from authoritarian governments, but from social media platforms as well. This year, Antelava wrote a feature story on the pressure independent newsrooms in Ukraine face from both Russian disinformation and restrictions from Meta.

Small news outlets in Ukraine, which have provided valuable local journalism to their communities, have seen ad restrictions on their social media pages due to their reporting on the war. And, seemingly as a result of a change in company policy, many outlets in Ukraine and other countries in the region saw massive drop-offs in their audience reach on Facebook. The restriction of advertisements and pathways for sustainability on tech platforms—as Antelava pointed out in her article—is indicative of platforms’ lack of understanding of the local context.

Ukrainian media’s struggle to monetize their social media content is one part of a larger regional issue with fostering financially sustainable news outlets. Throughout Eastern Europe and Eurasia, pressure from authoritarian governments limits newsrooms’ ability to be commercially sustainable. “In countries run by oligarchs where businesses are not going to advertise on a channel that gives voice to the opposition, [local and regional newsrooms] can’t be sustainable.” In countries with economic hardship, subscription and membership models are not feasible options for news audiences, and media outlets are reliant on international assistance, said Antelava.

That being the case, Antelava says that funders need to adopt a new attitude when it comes to supporting independent media. Many newsrooms can’t measure their impact because of the regulatory environment they operate in, so the “sheer existence of independent media” needs to be the goal of donor funding, she said.