Broadcasting in UN Blue: The Unexamined Past and Uncertain Future of Peacekeeping Radio 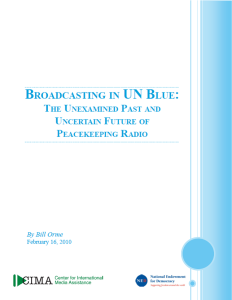 Broadcasting in UN Blue: The Unexamined Past and Uncertain Future of Peacekeeping Radio by Bill Orme, who served for the past seven years at the United Nations Development Program as a senior advisor on media development and strategic communications.  Orme is a former executive director of the Committee to Protect Journalists and has been a foreign correspondent for The New York Times, The Washington Post and The Los Angeles Times.

From Cambodia to Liberia, radio stations established by UN peacekeeping missions have helped end violent conflict and make political transition possible. They have provided citizens with trusted local news programs and nonpartisan discussion forums, often for the first time. But a lack of long-term UN planning and commitment to media development as an integral part of post-peacekeeping democratization have often made these achievements disappointingly ephemeral. This report examines the role that peacekeeping radio stations have played in post-conflict countries and offers recommendations to help UN radio services make lasting contributions to free media.