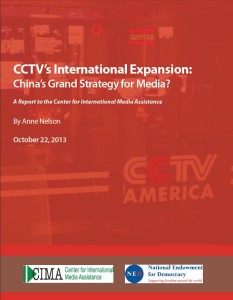 China Central Television has come a long ways since its founding as a domestic party propaganda outlet in 1958. The domestic service has been supplemented by an international service, boasting three major global offices in Beijing, Washington, and Nairobi, and more than 70 additional international bureaus. The quality of CCTV’s journalism depends on both the region in which it’s produced, and the subject matter’s sensitivity in Beijing. On one hand, CCTV produces sophisticated long-form reports on complex international issues such as climate change; at the same time, its reporting on the Chinese Communist Party echoes the party line.

CCTV’s biggest impact may be in regions where China is directing its international investments. The Nairobi operations complement extensive investments in African infrastructure, many of them in communications; China is also pursuing critical investment in Latin America and Southeast Asia.