Confronting the News: The State of Independent Media in Latin America 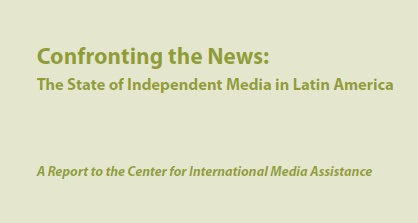 CIMA is pleased to release a new report, Confronting the News: The State of Independent Media in Latin America, by Douglas Farah, a veteran Latin America newspaper correspondent and national security consultant. The report calls attention to the deteriorating environments for independent news media in many Latin American countries as governments across the region increasingly push for limits on the press. It explores tactics used by these governments to silence the media and encourages the NGO community and U.S., European, and other Latin American leaders to put pressure on Venezuela, Ecuador, Nicaragua, and Bolivia, among others, to stop infringing on the right to freedom of expression and access to information.