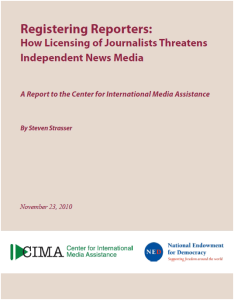 CIMA is pleased to release a new report, Registering Reporters: How Licensing of Journalists Threatens Independent Media, by Steven Strasser, an associate professor at the City University of New York’s Graduate School of Journalism. Licensing journalists continues to thrive as one way (among many) used by governments to control the press. An examination of regulatory practices in more than 100 developed and developing countries found that in at least one out of every four governments have a role in licensing–that is, in approving who can work as a journalist and who cannot.

Government policies that restrict the independence of journalists–including licensing–should be examined closely. This report concludes that organizations of journalists themselves are best equipped to regulate the ethical and professional standards of journalism and recommends that laws on licensing in developing countries be brought into line with international conventions on free expression. Governmental and non-governmental organizations can best contribute to this effort by providing high-quality education to aspiring journalists and seasoned professionals alike.