Social Media in the Arab World: Leading up to the Uprisings of 2011 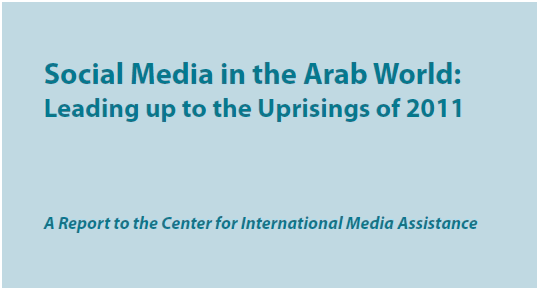 CIMA is pleased to release a new report, Social Media in the Arab World: Leading up to the Uprisings of 2011, by Jeffrey Ghannam, an independent media consultant, attorney, and veteran journalist with experience in the Middle East. This report was commissioned several months before the unprecedented popular uprisings in Tunisia, Egypt, and other countries of the region, which by all accounts were enabled by communication and citizen mobilization via social media platforms and mobile technology. The report examines the impact of digital media on freedom of expression in the Middle East prior to the 2011 protests. We have accelerated our production schedule to publish it now, as we believe that it will provide a useful backdrop to the events unfolding in the Arab region.

Democracy, Dissent, and Digital Media in the Arab World