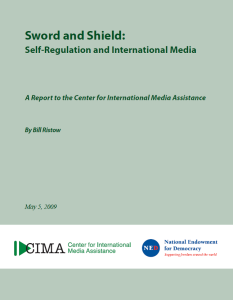 This report examines the ways in which media around the world have attempted to regulate themselves. Written by Bill Ristow, a veteran journalist and international journalism trainer, Sword and Shield: Self-Regulation and International Media discusses the use of press councils and ombudsmen around the world.

While nearly all such efforts officially espouse the same generalized high goal–raising the standards of media coverage, in part by giving the public a chance to criticize and question that coverage–there are significant differences among them in approach, scope, effectiveness, and, most significantly, independence.