The Long Shadow of Chinese Censorship: How the Communist Party’s Media Restrictions Affect News Outlets Around the World 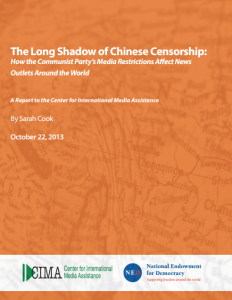 The Long Shadow of Chinese Censorship: How the Communist Party’s Media Restrictions Affect News Outlets Around the World provides a survey of this phenomenon and its recent evolution as it pertains to the news media sector, though similar dynamics also affect the film, literature, and performing arts industries. Specifically, this report focuses on six types of media outlets based outside mainland China that together reach news consumers in dozens of countries: major international media; local outlets in Asia, Africa, and Latin America; mainstream media in Hong Kong and Taiwan; exile Chinese outlets providing uncensored news to people in China; and media serving Chinese diaspora communities around the world.