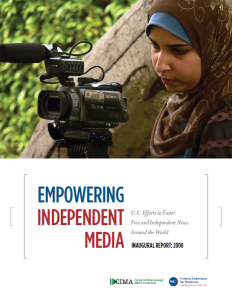 CIMA’s 2008 Inaugural Report provides an in-depth assessment of U.S. international media development efforts, both public and private, and calls on future efforts to be more long-term, comprehensive, and need-driven. The U.S., through government and private sector initiatives, spends at least $142 million annually on media development efforts in countries around the world.

Recommending a more holistic approach, the report looks at the international media development field from a number of perspectives:

Empowering Independent Media was the culmination of CIMA’s work since its inception in late 2006, and draws upon its reports, working group discussions, meetings, and additional research on topics including the public and private funding of projects, financial sustainability of independent media outlets, global investigative journalism, community radio development, among others.