Experimentation and Evolution in Private U.S. Funding of Media Development 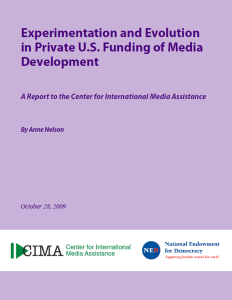 In this report, Anne Nelson, a former journalist now teaching at Columbia University’s School of International and Public Affairs, examines recent trends in private U.S. funding of media development projects around the world. While U.S. foundations have long funded both “media development” and “media for development” programs, recent political and economic trends have shifted the balance in favor of the latter. In addition, the recent economic crisis, which has exacerbated the precarious condition of  journalism in the United States, has led to retrenchment among many U.S. donor organizations.

The report recommends that foundations continue their consultative processes and explore new avenues for media development. New foundations should be included in these discussions to stimulate ideas, and  U.S. foundations and implementers should try harder to think beyond their cultural context to include more new media technologies.