Shifting Sands: The Impact of Satellite TV on Media in the Arab World 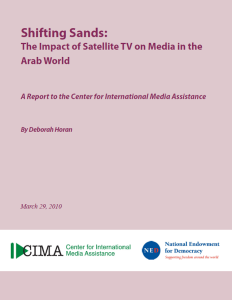 Shifting Sands: The Impact of Satellite TV on Media in the Arab World, by Deborah Horan, a veteran journalist with extensive experience reporting from the Middle East. Today, media in the Middle East and North Africa (MENA) are freer than they were a decade ago, with a proliferation of satellite television news channels leading the way. Arab newscasts cover events in real time, sometimes scooping their Western competition with spot news coverage of regional events. Government-run media have been forced to compete or lose audiences. Yet most governments in the MENA region have managed to retain a tight grip on media, whether through the arbitrary application of restrictive and vague press laws or limits on media production. This report examines the positive effects satellite coverage has had on the media environment and the reasons why the region still lacks overall media freedom.