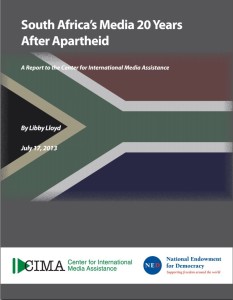 CIMA announces the release of its most recent report, South Africa’s Media 20 Years After Apartheid, by Libby Lloyd, a journalist and researcher on freedom of expression and media policy in South Africa. The report traces how in the post-1994 democratic era South Africa’s news media has become among the most concentrated in the world, affecting the quality of its content and the sales of its newspapers. It also examines how decreasing international development support has exacerbated that process.

Read a PDF of the full report here.