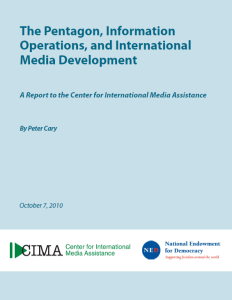 CIMA is pleased to release a new report, The Pentagon, Information Operations, and Media Development, by Peter Cary, a veteran journalist with extensive experience reporting about the U.S. military. As part of its post-9/11 strategy, the Department of Defense has launched a multi-front information war, both to support its troops on the ground and to counter the propaganda of radical Muslim extremists. The DoD’s global public relations war, however, has fostered criticism that the department has over-reached and tarred the efforts of non-DoD Americans doing media development work abroad.

While the DoD cannot be criticized for trying to protect the lives of its soldiers, it has spent vast amounts of money on media operations–which can tend to be conducted in secrecy and whose effectiveness often cannot be measured. This report examines the impact of DoD information operations on international media development efforts and offers recommendations– including that the DoD leave media activities that could be considered public diplomacy to the State Department.