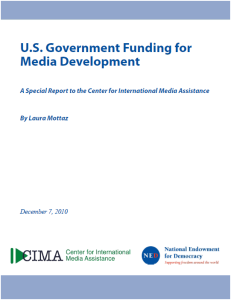 The report analyzes spending on media development by the U.S. Department of State and U.S. Agency for International Development (USAID), which budgeted $140.7 million for media development efforts in FY 2010. This figure represents a dramatic increase when compared with the $68.9 million spent only five years earlier.

Based on data provided by the State Department, the paper outlines trends in spending on media development, broken down between State Department and USAID programs and by region.