Winds From the East: How the People’s Republic of China Seeks to Influence the Media in Africa, Latin America, and Southeast Asia 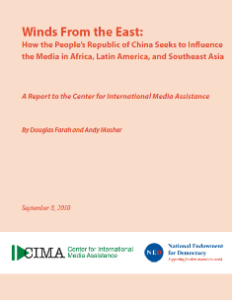 CIMA is pleased to release a new report, Winds From the East: How the People’s Republic of China Seeks to Influence the Media in Africa, Latin America, and Southeast Asia. The report examines the Chinese government’s efforts to reshape much of the world’s media in its own image. These activities often result in helping authoritarian governments expand control over their local media, while working to undermine the Western model of a free and independent media.

The report was co-authored by Douglas Farah, a national security expert and former correspondent in Latin America and Africa for the Washington Post, and Andy Mosher, a media consultant and former editor at the Post.