The Last Gasp of Empire: Russia’s Attempts to Control the Media in the Former Soviet Republics 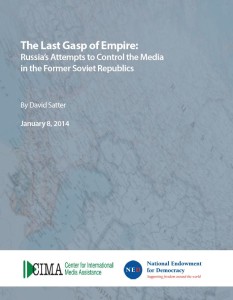 CIMA is pleased to release The Last Gasp of Empire: Russia’s Attempts to Control the Media in the Former Soviet Republics. Although the Soviet Union is a thing of the past, Russia still aspires to influence the news media in the former Soviet republics. The objective appears to be to manipulate their media environments in order to promote dependence on Russia and distrust of the West and to help Russia to pursue its political and commercial objectives–such as persuading former Soviet republics to adhere to the Eurasian Customs Union or promoting opposition to the United States and NATO. The push by Russia to influence the media among its near neighbors not only marks an important thrust of Russian foreign policy, it also poses a major challenge to the international media development community, which over the past two decades has spent hundreds of millions of dollars trying to help build sustainable and independent media institutions in the former Soviet space.