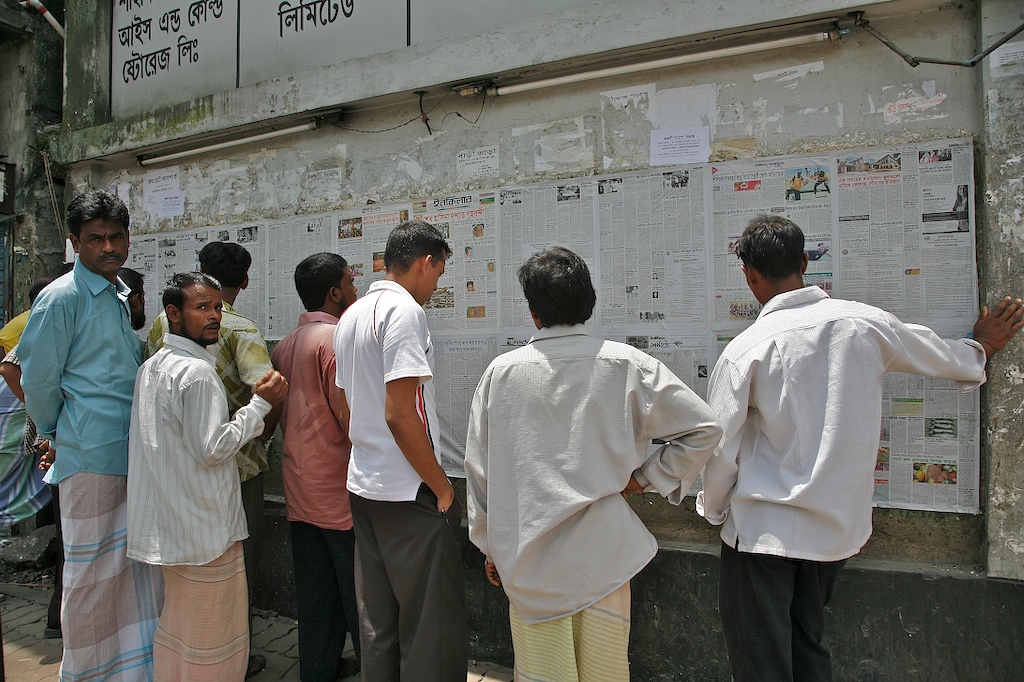 Bangladesh’s media ecosystem paints a contradictory picture. On the one hand, the country’s media sector has witnessed significant growth in the past two decades. On the other hand, media freedom in the country is steadily declining.

In 2020, Reporters Without Borders’ (RSF) Press Freedom Index ranked Bangladesh 151 out of 180 countries, the lowest ranking the country has received in over a decade. The government has used the Digital Security Act, introduced in October, 2018, to silence critics and clamp down on journalists. Journalists face harassment, arrests, and attacks by government supporters. Amidst an already stifling climate of self-censorship, reports have emerged that the Bangladeshi government has bought aggressive mass-surveillance equipment often used by authorities to track attendees at protests and demonstrations. Given these trends, it is clear that the space for free expression and independent journalism in Bangladesh is shrinking as it slides deeper into authoritarianism.

At the same time, the Bangladeshi media sector appears to be flourishing, with the number of media outlets mushrooming over the past decade. According to government sources, as of 2020, Bangladesh has 45 private television channels, 28 FM and 32 community radio stations, 1,248 daily newspapers, and more than a hundred online news portals. This apparently robust media landscape in an increasingly restrictive environment begs the question: who owns the media in Bangladesh?

Who Owns the Media?

Getting clear information on who owns media outlets in Bangladesh is difficult. Credible and reliable data on media ownership is often not publicly available, primarily due to media companies’ lack of transparency. As a result, information such as who serves on the board of directors and the extent of their financial involvement in the company is not publicly available or open to scrutiny. Media companies also do not publish their annual financial statements, further limiting transparency. There are few groups in Bangladesh capable of calling out this lack of transparency in the media sector’s finances. Media watchdogs are practically non-existent in the country. And, there are only a few academic studies that explore the connection between press freedom and media ownership in Bangladesh.

“Who Owns the Media in Bangladesh?”, a recent study sponsored by the Center for Governance Studies (CGS) in Dhaka, attempts to fill this gap. In an analysis of 48 major news outlets, each owned by one of 32 business entities, the study examined patterns of media ownership, including ties to various political and economic interest groups.

Through an exploration of more than a hundred profiles of companies and business conglomerates, their owners, and their investments in media outlets, this study reveals three key overlapping features of the media ownership landscape in Bangladesh.

1. Many media outlets are controlled by the owners’ family members. Nepotism is a well-known factor in the ownership and management of media companies in Bangladesh. The chairmen of business conglomerates that own media companies often hire their family members to manage them. The Bashundhara Group, a business group whose media arm owns some of the most influential news outlets in the country, is an example of this. The chairman’s son is managing director of several companies owned by the group, including one of its television channels.

Another manifestation of this desire to control news outlets is the growing trend of media owners acting as editors of the newspapers they own. In 2016, Bangladesh’s Information Minister revealed that 93 percent of newspapers were owned by their editors. Fewer than 100 newspapers in the country were run by professional editors.

Further, members of the same family with opposing political affiliations control multiple media outlets as owners of different business groups. For instance, two brothers of the Chowdhury family, Sayeed and Saber, own and manage two different business conglomerates that each own several media companies. Sayeed is known to be critical of the ruling party, the Awami League, while Saber is a Member of Parliament affiliated with the party. This demonstrates how the oft competing business and political interests of Bangladesh’s elite families shape media ownership patterns.

2. Most owners are directly or indirectly affiliated with political parties. These associations manifest in numerous ways. The relationship a media owner has with the government can influence whether a media outlet receives a license. Politicians themselves own media outlets, which then serve as a mouthpiece for their platforms. This kind of clientelism means that media ownership often changes with regime change.

Perhaps the best example of this is Ekushey Television (ETV). The channel has changed ownership multiple times since its founding in 2000. With each regime change, the channel was shut down until it was under the control of supporters of the new government.

3. Most media outlets in Bangladesh are owned by large business conglomerates with diverse financial interests. There are reasons to be alarmed by the intersection of business, politics, and media in Bangladesh. Media owners’ significant presence in banks and financial institutions, the insurance industry, energy, and real estate, is especially worrying. They use their influence on the outlets they own to promote their business interests, advance their political interests, and curry favor with powerful politicians.

These conflicts of interest also have serious implications for media trust. Each of these four sectors has made headlines over the years for financial irregularities and questionable business deals. Several media owners with ties to these sectors have been charged with corruption.

There are indications that owners exert their influence to manipulate media content. News outlets owned by the Gemcon Group were conspicuously silent about the arrests of two students at the University of Liberal Arts, Bangladesh, following demonstrations for tuition waivers during the COVID-19 pandemic. Given that the group’s chairman sits on the university’s board of trustees, this silence suggests deliberate and direct interference in the editorial process of those outlets. The extent to which news content is influenced by the political and business interest of media owners is an important question that warrants further investigation.

“Who Owns the Media in Bangladesh?” barely scratches the surface of the media landscape in a country that is undergoing steady declines in its democratic governance. As the government moves to consolidate power, the country is well on its way to becoming a hybrid regime—an authoritarian system that maintains a thin veneer of democratic institutions. Over the past decade, shrinking democratic space, lack of transparency and accountability, and the wanton use of restrictive media laws have become the defining logic of the country. The consolidation of the media sector in the hands of a few wealthy business owners with vested economic and political interests is an alarming trend.

Additional research needs to be conducted to determine the impact of ownership patterns on the editorial independence of news outlets and the quality of journalism. The data and evidence in this study serve as an important starting point for greater investigation into the threats facing the independent media environment in Bangladesh.

Ali Riaz is a Distinguished Professor of political science at Illinois State University.

Mohammad Sajjadur Rahman is a Ph.D. candidate at Clark University.