The Role of Political Cartoons in Ecuador 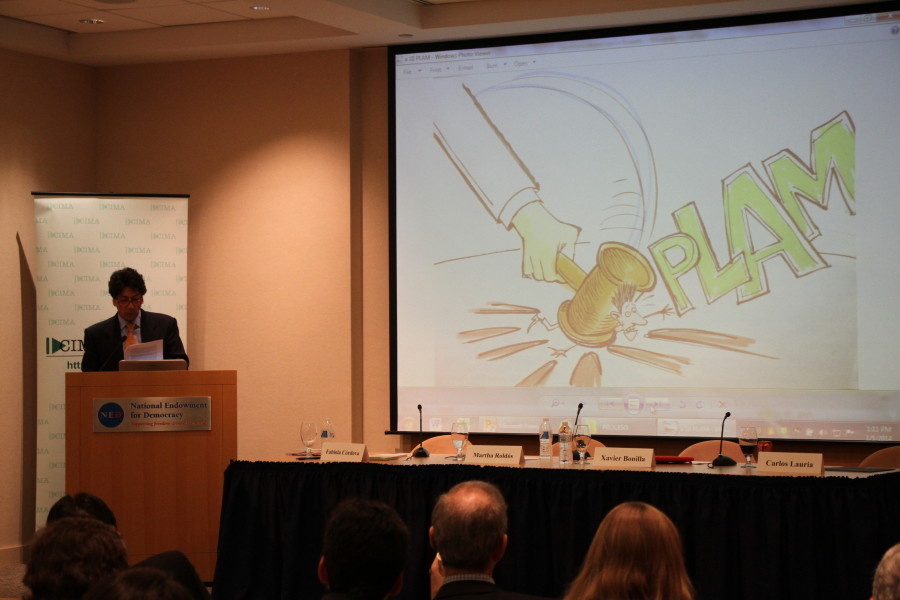 RSVP here for the March 18th event at Freedom House!

Communications Law in Ecuador: When Censoring a Political Cartoon Becomes a Presidential Priority

CIMA, NED, and Freedom House sponsored an event on March 5 to raise awareness of Ecuador’s most recent controversy involving Xavier Bonilla, a prominent political cartoonist. Martha Roldós of Fundación Mil Hojas and Carlos Lauría of the Committee to Protect Journalists also provided commentary both on the deteriorating media freedom situation in and the role of political cartoons in Ecuador. Bonilla’s cartoons were played at the venue leading up to the start of the event.

In June 2013, the National Assembly in Ecuador approved a restrictive communications law that, among other things, designates the media as a public service subject to government regulation. This law is fueled with broad language that leaves the door open for government censorship. Perhaps the most concerning aspect of this law is an article detailing  “media lynching.” Lauría defined this as the “dissemination of consorted and reiterative information with the purpose of undermining a person or legal entity.” With legislation including these types of provisions, it is clear that the government is sending the message to journalists that there will be consequences if they step over the line.

The Ecuadorian government implemented this law for the first time in early 2014 when it sanctioned Bonilla for publishing a cartoon that depicted the house raid of journalist Fernando Villavicencio. Bonilla was forced to publish a correction for the cartoon, and El Universo, the newspaper that published the cartoons, had to pay a $93,000 fine.

During Bonilla’s speech, he mentioned that on President Correa’s Saturday show, he heard the president saying words like liar and “assassin with ink,” and then he realized that he was saying those things about Bonilla. Bonilla’s personality was evident through his presentation. The audience frequently laughed as he told his story, shuffling through a slideshow of his cartoons and highlighting the importance of humor in his life.

Raising the visibility of Freedom of Expression in Ecuador

For many of us who follow press freedom, Ecuador has been a headliner for the last several years. From costly libel cases, to President Correa’s rhetoric toward journalists and independent media outlets, to the sheer absurdity of forcing a political cartoonist to publish a correction of a cartoon, there is no shortage of stories involving the repression of independent media in Ecuador. In fact, according to Freedom House’s Freedom of the Press Survey, Ecuador has declined by 20 points from Free to Partly Free in the last 10 years. The regional context includes an array of legislative, judicial, and regulatory measures imposed by democratically elected governments. However, press freedom in Ecuador and Latin America as a whole is often overlooked by people who don’t follow media freedom closely. By bringing high profile stories like Bonilla’s to center stage, we can start to raise awareness that freedom of expression in both Ecuador and Latin America in general is in jeopardy, and hopefully, start to make a difference.

In case you missed it, watch the full video of the event here.