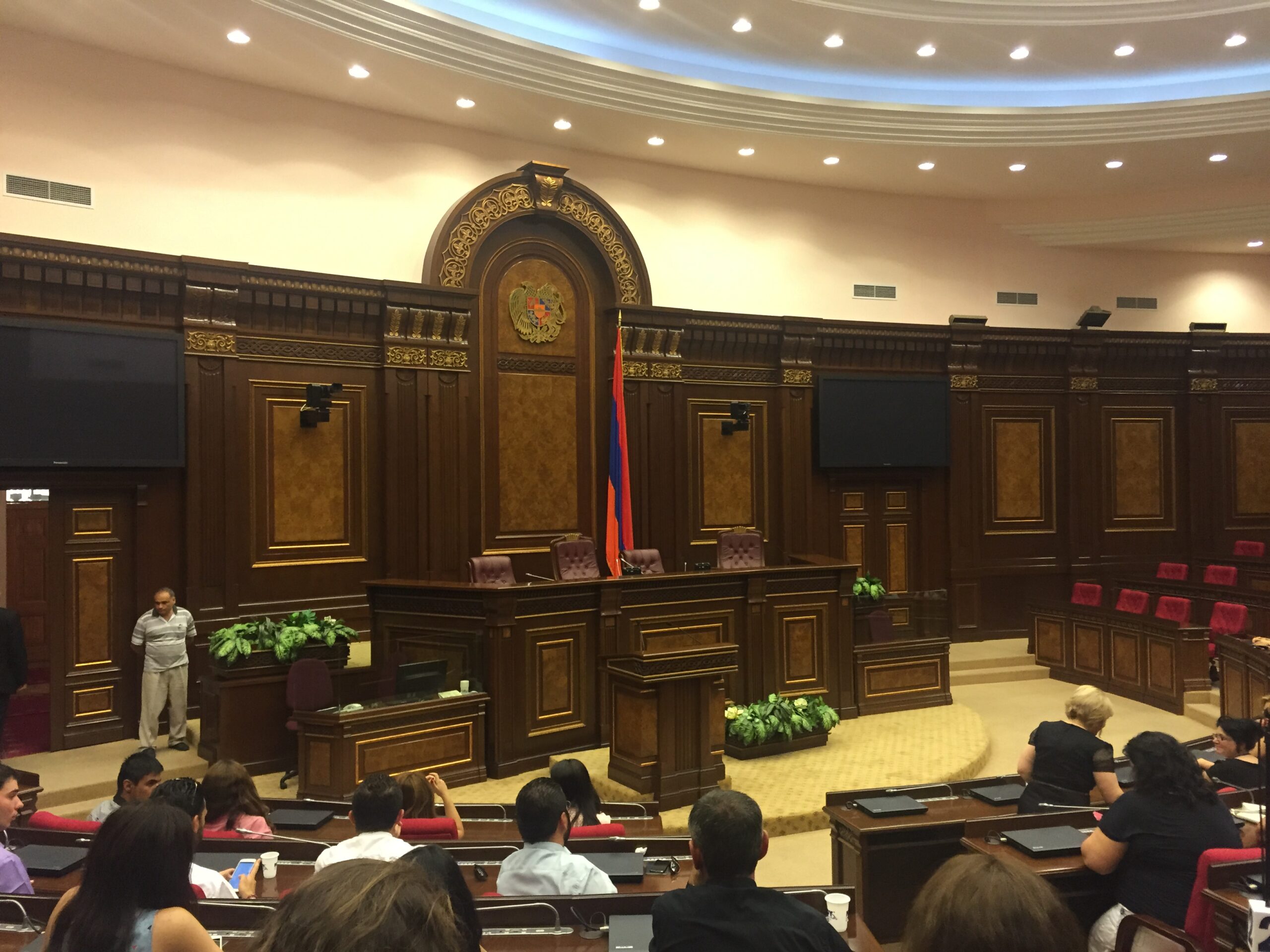 In the wake of a recently reignited war with Azerbaijan in 2020, concerns about the spread of digital disinformation in Armenia have grown. So much so that a raft of legislation has been proposed by lawmakers in the Armenian parliament to address the issue. However, some of the current proposals would severely impact journalists’ ability to cover stories of public interest. For example, one proposal would effectively bar Armenian journalists from using online sources in their reporting—a significant impediment in an age when people communicate so much via digital platforms.

To be clear, there is no doubt that the spread of disinformation is an issue that societies must grapple with given that its malign use can undermine democracy. This is especially true in regions experiencing conflict, where citizens struggle to access high-quality, accurate information. Yet it is also important that efforts to curb disinformation do not restrict important democratic norms and values, such as press freedom and access to information.

In September 2020, when the decades-long armed conflict between Armenia and Azerbaijan over control of the Nagorno-Karabakh region escalated, Armenia was also battling an online media war. For instance, Facebook removed an Azerbaijani network of 589 Facebook accounts, 7,665 Facebook pages, and 437 accounts on Instagram for “coordinated inauthentic behavior,” which, according to Nathaniel Gleicher, head of security policy at Facebook, occurs when multiple accounts and personas work together in order to mislead others about “who they are or what they are doing.” In this case, the accounts posted primarily in Azerbaijani, but also in Russian and English, and discussed domestic and regional developments, including the war in Nagorno-Karabakh. Despite Facebook taking action, a Guardian investigation uncovered that this network was back on Facebook as of April 2021.

It is against this backdrop of swirling social media disinformation that, in the early months of 2021, Armenia’s then-ruling My Step Alliance introduced several bills that would impact press freedom in the country. Although the Alliance itself has since been dissolved, the country’s president and prime minister remain unchanged and one of the Alliance’s main constituent parties continues to hold power. The Civil Contract party won a major victory in the recent parliamentary elections, cementing its position as the ruling party and granting it a newly renewed mandate to push forward legal reform. There are currently three bills championed by the ruling party that, if adopted and implemented, could have a chilling effect on press freedom in Armenia.

The first proposed bill expressly prohibits journalists from using online sources that cannot be identified. The bill defines these “anonymous sources” as any website or social media account or channel whose owner cannot be identified by readers. Considering the difficulty of verifying users’ identities on social media, this bill risks severely limiting journalists’ ability to use information from online sources. Proponents of the bill argue that the spread of information attributed to unknown sources poses national security risks. They claim that by spreading information from anonymous sources—whose motives cannot be examined and who cannot be held to account if their information is false—trusted news outlets could inadvertently promote the interests of foreign actors. Under the proposed bill journalists would be able to use the information received from these sources so long as they do not attribute the information to any particular source. This leaves journalists solely responsible for the validity of the information, thereby placing a higher burden on them to verify sources and information.

The second bill, which was adopted by parliament on March 24, 2021, was one of two pieces of legislation proposed by Alen Simonyan, deputy speaker of the Armenian National Assembly and a member of the Civil Contract party. The bill introduced amendments to the Civil Code that tripled the financial penalty for defamation or insult. There are indications of internal conflict among the country’s political leadership over these amendments. Following discussions with national media support organizations, President Armen Sarkissian declined to sign the bill into law and referred the matter to the Constitutional Court.

The third bill under consideration, also proposed by Simonyan, includes changes to the Criminal Code that would impose strict penalties, including steep fines and potential imprisonment, for deliberately spreading false information using a pseudonym and for defamation or insult using a pseudonym. In justifying his proposal, Simonyan cited national security concerns posed by Azerbaijan and online fake profiles that spread misinformation, which he contends potentially violate an individual’s right to dignity.

Despite the stated intentions of these bills, it is clear that at least some of the proposals are specifically focused on how public officials might be portrayed in the news. And considering the punishingly high fines for defamation and insult cases, these proposals are likely to go beyond combating mis- and disinformation and have a chilling effect on journalism.

Just last year, Reporters Without Borders sounded the alarm about a number of defamation suits being used by politicians to harass journalists in Armenia. Thus, while the bill on the deliberate spread of false information may attempt to address the fast spread of mis- and disinformation online, its overly broad language may result in unjustified prosecutions, including prosecutions of journalists.

Several Armenian media experts have claimed that the governing political party was trying to limit media freedoms. A number of Armenian media organizations issued statements, expressing their grave concerns and urging the National Assembly to reconsider moving forward with the bills. The bills also drew criticism from international organizations. For example, Freedom House issued a statement, alerting Armenian authorities of the chilling effect of the proposed bills on access to information and media freedom in the country.

Boris Navasardyan, director of Yerevan Press Club, criticized the bill that bans the use of unknown sources, noting that it focuses on the source and not on the content of the shared information. This potentially creates a situation where a news outlet could be penalized for publishing factual information from a source that cannot be identified.

Shushan Doydoyan, head of the Freedom of Information Center, argued against the use of the term “anonymous sources” in the bill, noting that it is misused and risks harming legal protections for the use of anonymous sources. Typically, an anonymous source in journalism is someone whose identity is known to the reporter but has asked not to be publicly identified, while the bill refers to sources unknown even to the reporter. Article 5 of Armenia’s mass media law protects the confidentiality of anonymous sources and lawmakers have since agreed to change the term in the bill to “non-identified sources” to clarify the distinction, though no changes have yet been made to the text of the bill.

Rather than anonymous sources, according to Doydoyan, the authorities allegedly see most of the risks arising from encrypted messaging apps, such as WhatsApp and Telegram, where every user is a source of information, which may be unverified, but is still easily spread over the internet.

All of these proposed measures limit journalistic freedoms, and therefore will potentially restrict the ability of journalists to serve as public watchdogs. While the purported goal of ensuring a higher level of journalistic ethics is a noble one, threatening journalists with heavy sanctions for publishing true information from an unknown source or spreading an allegedly defamatory comment does not serve that purpose well. In the current state of domestic affairs, an independent and professional media stands to play a central role in ensuring that Armenians get comprehensive information about domestic developments.

Although the June 2021 triumph of the Civil Contract party over its opposition, a coalition led by influential figures from Armenia’s authoritarian past, was seen by some as a victory for the country’s democratic future, the proposals discussed throughout this piece suggest that progress in a democratic transition is rarely quite that simple. What the party and its allies in parliament choose to prioritize moving forward will determine the fate of Armenia’s still-fragile democratic gains. As the country struggles to recover from the war in Nagorno-Karabakh , the proposed bills risk undermining press freedom at a time where access to high-quality, independent journalism is especially needed. It is, as such, more important than ever to hold the government to account and demand stronger safeguards for Armenia’s burgeoning media sector.

Meri Baghdasaryan is a human rights lawyer from Armenia, focusing on digital rights issues at the intersection of law and technology. She recently received a Master of Laws degree from University of Pennsylvania Law School, with a concentration on intellectual property and technology law, and is currently a legal fellow at Wikimedia Foundation.