Azerbaijan’s Triple Threat to Media and Freedom of Expression 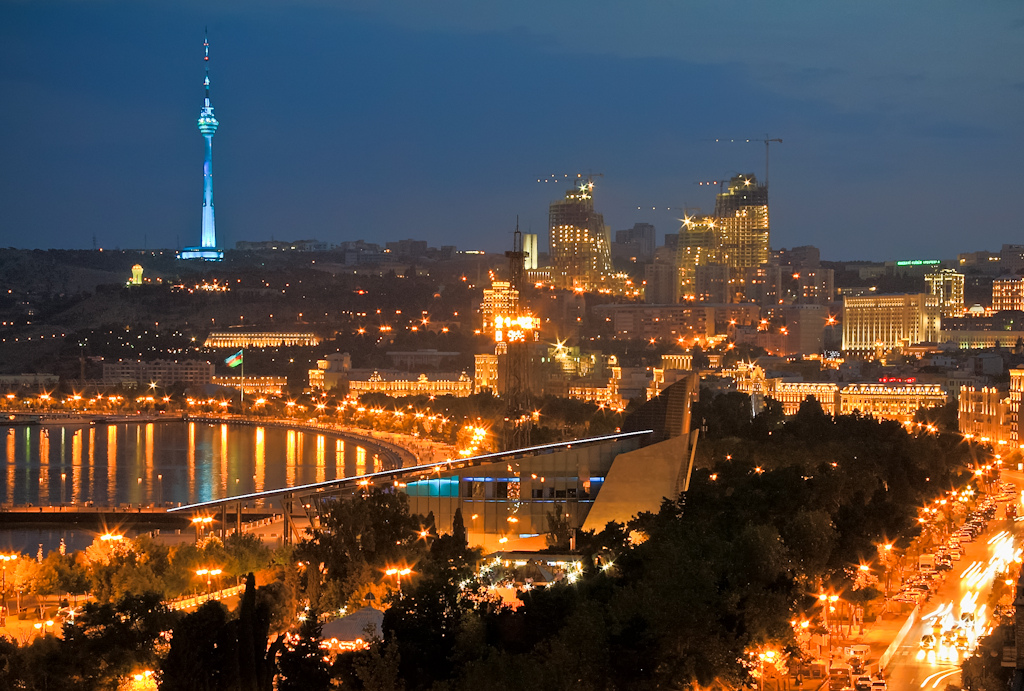 Azerbaijan has been routinely condemned for its alarming human rights record, endemic levels of corruption, and election fraud. Not surprisingly, according to Freedom House’s 2018 Freedom in the World report, Azerbaijan is assessed as a “not free” country. While Azerbaijan has been governed by authoritarian means since 1993, the past few years have been marked by an increasing crackdown on dissent and freedom of expression.

Today the country does not have a single independent television channel. The government controls all stations, and the public does not see any opposition or independent civil society figures on TV. The last pro-opposition newspaper, Azadliq, had to stop being publishing in 2016 due to financial difficulties and government restrictions. Even when it was published, it had a very small circulation and did not reach the majority of the population. Consequently, many people in Azerbaijan have turned to the internet and social networks to stay informed about domestic events. Opposition and civil society groups use Facebook as their main platform to reach the public, raise awareness about human rights abuses happening in the country, plan their actions, and mobilize people for protests and campaigns.

There are around 2.6 million Azerbaijani accounts on Facebook. In a country of 10 million, this means that 26 percent of the population over the age of 14 has a Facebook account. Of course, it is very difficult to verify the real number of users, since some people have multiple accounts and there are also a number of fake profiles. Some of the fake profiles are created by the government for trolling purposes, while others are created by ordinary citizens to hide their true identity for political or personal reasons. A significant portion of Azerbaijanis use Facebook to stay informed about the political situation—around 500,000 users follow independent media outlets, such as Meydan TV and Azadliq Radiosu. Similarly, the Facebook pages of opposition parties and leaders have upwards of 300,000 followers. This demonstrates that a significant number of Facebook users in Azerbaijan want to stay informed about the plans and messages of the opposition. These numbers will only rise as more and more Azerbaijanis join Facebook.

Government authorities are not happy with dissent and activism displayed on Facebook, which, from time to time, spills over into the offline world. After purging dissent from TV and print media, the regime has now begun a campaign against free expression on the internet. In particular, it has employed three primary tactics that merit highlighting.

Last year authorities started to block independent websites outright as part of its broad crackdown on dissent.  The regime did not ban these websites before 2017 for fear of a further blow to its international reputation and comparisons to the most repressive governments. President Ilham Aliyev often boasted that the internet in Azerbaijan was free. Nevertheless, the regime has largely phased out its policy of feigning democracy. As a result, the government could not withstand the temptation of blocking independent online media outlets like meydan.tv, abzas.net, and Azadliq in hopes that this would censor information. Although initially this step was effective in decreasing their audiences, these websites are slowly regaining their viewers through various tools and thanks to increasing knowledge of the population on tools to access blocked websites.

Using Troll Armies to Divert Attention from the Real Issues

Another tool applied by the government is unleashing troll armies on opposition activists and independent journalists in an attempt to defend the government, defame activists, and divert attention from the real issues. It is done in such a sloppy way that it is very easy to detect these trolls on Facebook. Their profile photos are often images of the ruling family and they regularly mention the ruling party or different governmental structures as their workplace in their profile. They tend to copy and paste the messages of other trolls—a single Facebook thread might contain three of four similar pro-government comments. These slipshod tactics ultimately undermine the main purpose of trolling, which is to sow doubt and suspicion among activists and the broader public.

Here is one example of how government-backed trolls are employed by the authorities. Many Facebook pages carry out online polls about the presidency, and troll armies are mobilized participate in these polls to vote for the regime’s candidate and post comments favorable to President Aliyev. The first screenshot shows comments about the School 14 in the city of Shirvan by users who are also supportive of President Aliyev and affiliated with School 14. It is clear that local authorities mobilized these people to vote for Aliyev in order create the illusion of widespread support. They were also probably asked to mention their relation to School 14 so that the authorities could the work of those people receiving their salaries from the state budget. Although this approach makes monitoring their activities easy, it also enables activists and other Facebook users to detect trolls with little effort. The second screenshot depicts fake profiles used to create illusion of support to the regime. For instance, four profiles named “Sadiq Balayev” have voted for President Aliyev—perhaps they are by the same person or even same organization. 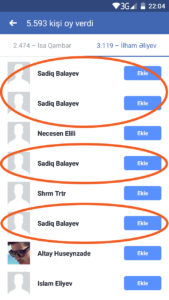 The anomalous repetition of the user name “Saadiq Balayev” indicates these may not represent real people. 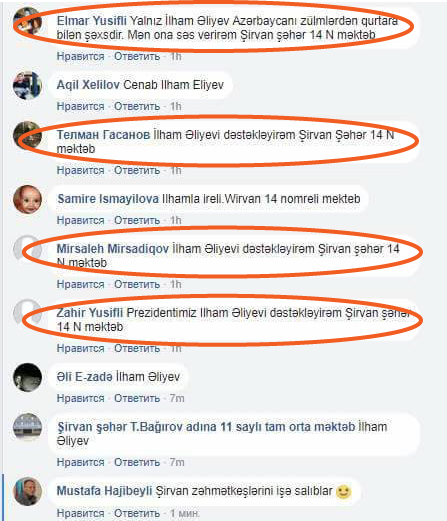 Creating a general climate of fear is the mechanism the government uses to induce self-censorship. Rising discontent in the country has caused more and more people to openly state their unhappiness online. These thoughts are usually posted on Facebook, often on the pages of the members of the ruling family. Even though general criticism online is ordinarily tolerated, crossing certain red lines might get you in trouble. Openly mocking and harshly criticizing the ruling family members can even get you arrested or beaten. When someone is arrested or harassed by authorities, the first thing that activists do is to check their Facebook profile for criticism of the government. This is often the real reason behind the arrest or harassment, not the official charges of drug trafficking, resistance to police, or hooliganism. Although it is impossible to punish everybody criticizing or mocking the ruling family, the authorities punish some people to set an example for others. The threat of retribution causes many disaffected users to refrain from making their criticism public. Self-censorship is ultimately the authorities’ most effective tool because of its ability to suppress dissent.

In the Long Run, Repression will not Prevail

Silencing of critics and harassment of activists online does not change the reality of the country. People are unhappy due to ubiquitous corruption, lack of employment opportunities, human rights abuses, and a general lack of hope for a better future. Their discontent will continue to rise unless the government enacts major political, social, and economic reforms. Repression can only postpone the time until people start more openly and vocally demanding change.

Turgut Gambar is currently a Reagan-Fascell Democracy Fellow at the National Endowment for Democracy. He is a founding board member of the NIDA Civic Movement, a Baku-based organization that seeks to promote democratization in Azerbaijan through nonviolence. He also helped to found the OL Youth Movement, a group that engages youth in democracy building, where he was part of the team that launched the Free Thought University Project, an online platform for lectures, debates, and discussion on politics, economy, and law. He has conducted research on religion and democracy, the situation of religious communities in Azerbaijan, and their attitude toward secularism.  As part of his work, he has advocated for youth engagement, the release of political prisoners, and freedom of assembly