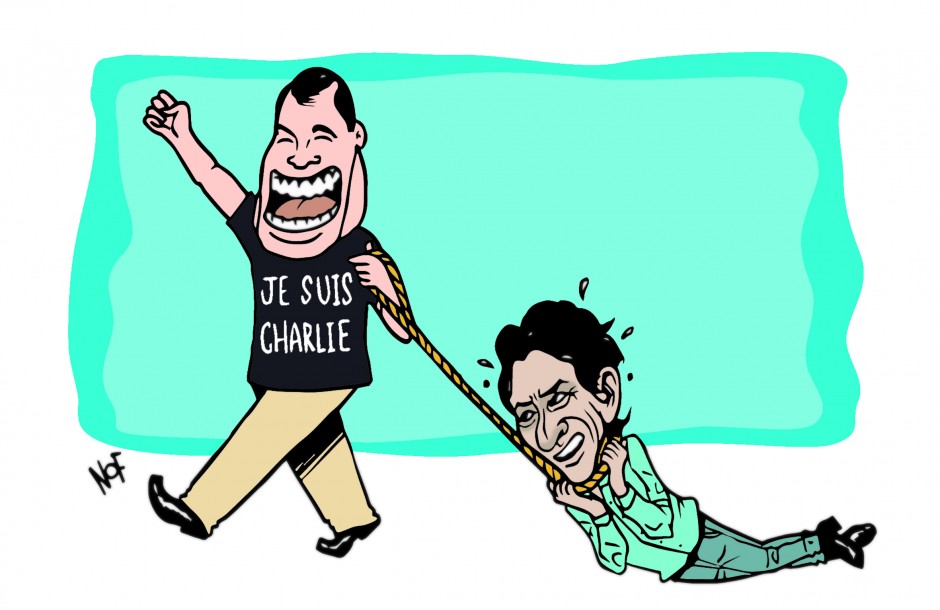 In January 2015, the targeted assassination of French cartoonists working for the satirical journal Charlie Hebdo in Paris moved and alarmed the international community.  Voices have been silenced.  Censorship 1 – Pencils 0.

In September 2014, Venezuelan Rayma Suprani was let go from her post as longtime cartoonist for Venezuela’s oldest daily, El Universal.  Her last contribution to the newspaper denounced the acute public health crisis affecting her country, which she attributed to Hugo Chavez’s regime and legacy.  In the months leading to her dismissal, El Universal had been mysteriously bought by President Nicolas Maduro’s front men. Voices have been silenced.  Censorship 2 – Pencils 0.

In January 2014, Ecuadoran political cartoonist Xavier Bonilla, known as Bonil, was the first journalist sanctioned by the restrictive Communications Law. President Rafael Correa had used a televised address to brand Bonil a “shameless, ignorant, hating, coward disguised as a cartoonist” and an “assassin with ink.” Ecuador’s information agency forced Bonil to publish a rectification of his cartoon, more to Correa’s liking. Voices have been silenced.  Censorship 3 – Pencils 0.

In Ecuador, President Correa expressed support to the victims of the terrorist attack that shook Paris.  He participated in a popular gathering in front of the Alliance Française in Quito and shared his own interpretation of freedom of expression.  In Corrrea’s view, “every freedom should have its limits,” so that opposition journalism is not used to promote individual interests.  On this occasion, the Alliance Française was similarly minded—they requested the Ecuadoran daily El Universo not publish a picture which advocated the following message: “In this country, criticism and satire are also silenced, not by terrorism but by the government.”  The French staff is said to have close ties with the ruling party, Alianza País.

On February 9, 2015, Xavier Bonilla will face another legal complaint brought this time by the Information Regulatory Council, which has deemed one of its cartoons to be discriminatory. His August 5, 2014, cartoon depicted the Afro-Ecuadoran Representative Agustín Delgado of Alianza País.  While the Ecuadoran government uses a racial argument to silence Bonil, the cartoonist condemns the government’s double-standard.  Censorship 4 – Pencils 0.

#JeSuisCharlie does not require a Spanish translation.  #JeSuisCharlie, #YoSoyBonil, #YoSoyRayma are a universal message to prevent more voices from being silenced and to allow more pencils to be sharpened.  Coincidentally, or perhaps not, on January 27, 2015, Bonil was nominated in the “Artist” category for Index on Censorship’s Freedom of Expression Awards 2015.  Pencils 1 – Censorship 4.