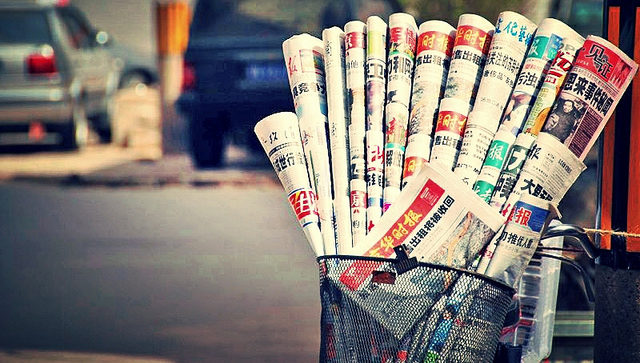 At a press briefing during China’s National People’s Congress convened in March, a local Chinese journalist’s dramatic eye-roll in response to her fellow reporter’s softball question went viral after it was captured on China’s state-run CCTV broadcast. The momentary glimpse of a candid reaction in a setting that is supposed to be completely staged captured the attention of netizens who were taken aback by the journalist’s unwitting honesty. Subsequently, all of the details about the two journalists, everything from their names to the colors of their clothes, became hot topics not only to citizens on social media, but also to Chinese censors interested in suppressing discussion of the incident.

China’s netizens quickly discovered the story’s two main characters. The softball questioner, Zhang Huijun, works for American Multimedia Television USA (AMTV), a Los Angeles-based news organization that has previously partnered with CCTV, according to the organization’s description on the American International Chamber of Commerce’s website. It soon came to light that Zhang was actually a former reporter at a state-owned Chinese news outlet called World Affairs. Given her background, it was no wonder that many netizens were genuinely suspicious about how “foreign” she and her US-registered organization actually are. A group of Chinese living overseas started a petition on the White House’s “We the People” page asking the US government to investigate whether AMTV has a direct link to Chinese government. Indeed, a closer look into the Chinese government’s engagements with media outlets registered overseas that cater to the Chinese diaspora indicates a concerted effort by the government to promote positive coverage that fosters China’s geopolitical objectives.

Lack of international attention to these “foreign” media may be due to their Chinese language content and because their target audiences are Chinese diaspora communities. However, Chinese officials have not overlooked these outlets as they developed an external propaganda strategy that targets the Chinese overseas population. Indeed, the Overseas Chinese Affairs Office (OCAO) of the State Council has been actively engaging with the Chinese language media based overseas through China News Service (CNS)—an important arm of the Chinese government in disseminating its propaganda among overseas Chinese. Since 2001, CNS has held nine biannual Global Chinese Language Media Forums in China. The Ninth Global Chinese Language Media Forum held in Fuzhou city in 2017 was attended by more than 460 reporters and editors from overseas Chinese media from over 60 countries. Forum topics included the “Chinese Dream,” and the “One Belt One Road” initiative, the Chinese government’s hallmark foreign economic development and engagement effort. Since 2006, OCAO has trained more than 500 journalists and editors, though with training titles like “Telling good stories on China,” it is clear the goal has been to drum up positive coverage of China’s priorities, rather than to encourage independent assessments of what the Chinese government is doing both at home and abroad. Additionally, China’s official news agency Xinhua provides free content to those overseas-based Chinese media outlets.

Clearly, Chinese media outlets overseas are being targeted by the Chinese government’s overt international media propaganda strategy, which also depends on the 228,000 reporters inside China working at various state-controlled media outlets. Amplifying the reach of propaganda has become one of the party’s priorities under the leadership of Xi Jinping. The “Voice of China” was founded after merging three state-level TV and radio network is the latest sign of China’s commitment to “propagating the party’s theories, directions, principles and policies” as well as “telling good stories” about China. This is another effort by the Chinese Communist Party (CCP) to centralize control in order to project a more positive image of China internationally. And these plans continue to grow in scope. For example, during the National People’s Congress in March, a representative from the Shanxi provincial delegation proposed establishing a “Silk Road Satellite TV” station to complement China’s One Belt, One Road initiative. If this station is established, it would be another international mouthpiece of the CCP to “tell good stories about China.”

Under the guise of increasing its international ‘soft power,’ China has been extending its propaganda arms beyond its borders and sometimes with disturbing tactics. For example, the Chinese community in Australia spoke out against Beijing’s attempts to infiltrate their Chinese-language media. These attempts included the direct involvement of the Chinese consulate in creating commercial pressure to their businesses, thereby acquiring major stakes in previously independent newspapers. In this propaganda approach, not only does China try to sell its “good stories”—which often do not reflect the full picture of China—but also tries to pressure these media into self-censorship: avoiding criticism of China and even producing pro-Beijing content. To combat this spreading epidemic of foreign interference in its local media, the Australian parliament is considering a comprehensive legislative reform package taking aim at foreign interference: the National Security Legislation Amendment (Espionage and Foreign Interference) Bill 2017 and the Foreign Influence Transparency Scheme Bill 2017. While these proposals are by no means perfect and may need to be slightly adjusted, they represent a serious attempt to protect the integrity of independent media ecosystem in the country.

There are no official statistics on Chinese language news and media outlets registered outside China. And while it is difficult to prove whether those overseas-based Chinese media currently receive (or have in the past received) funding from the Chinese government, all the facts cited above clearly indicate that the Chinese government is seeking to shape the news coverage of these outlets in ways that undermine a free and independent press.

Currently, there is a draft bill in the U.S. House of Representatives that would require Confucius Institutes, the educational institutes affiliated with the Chinese Ministry of Education, located in the US to register as foreign agents. Moreover, a 2017 report by the U.S. China Economic and Security Review Commission urged Congress to require Chinese journalists representing state media to register as foreign agents. The world has started to pay attention to China’s growing international footprints, and in that spirit, China’s ongoing attempts to influence Chinese language media outlets and use it as an extended arm of propaganda need substantive responses from the broader international community, especially from democracies.

China, when promoting its objectives internationally and targeting the Chinese community overseas, should adhere to the rules and regulations on media freedom and independence. In the meanwhile, democracies around the world should protect the press freedom of those Chinese-language media outlets in their countries too, as they are part of larger community. “Telling good stories on China” should not undermine press freedom that is part of democratic norms and values of democracy. We need more countries like Australia to speak up against this type of infiltration. After all, these are not China’s ‘internal affairs’ that they are trying to influence.