Defending the Defenders: As Risks to Lawyers Increase, Media Needs to Shine a Light 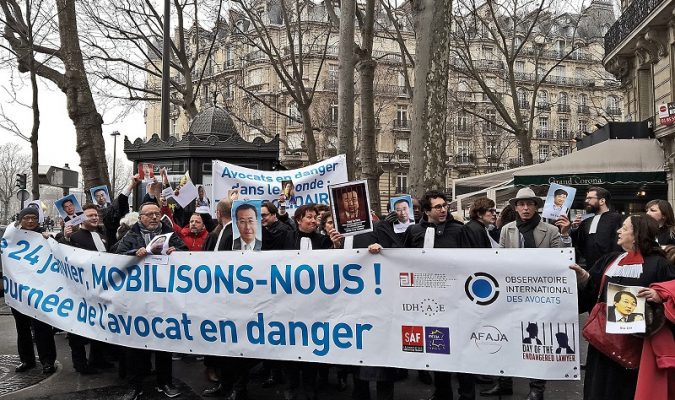 Mobilizations in defense of lawyers in Paris on January 24th. (Photo courtesy IAPL)

Lawyers are no strangers to severe repercussions for defending human rights or taking on politically sensitive legal matters. But their plight has long been in the shadows, until recently.

The Day of the Endangered Lawyer, now in its seventh year and officially commemorated on January 24, has ongoing activities globally to recognize the plight of human rights lawyers with a focus on the dire situation for lawyers in one designated country—this year it was China.

Along with greater awareness, the plight of the endangered lawyer is a trending topic of multistakeholder discussions with calls for increased coordination among legal associations, human rights groups, civil society, and at the UN. I’d also suggest that independent media institutions join the effort to amplify reporting on the crisis confronting lawyers.

To be sure, lawyers facing threats to their professional duties and lives are not new phenomena. Human rights and press freedom organizations regularly assess and rank countries’ legal enabling environments along with case studies of crackdowns among the world’s worst offenders.

Still, attacks against lawyers and the need for their protection have spurred several bar and legal association initiatives to defend the defenders. These groups have support in the form of recommendations presented by Mónica Pinto, the former UN Special Rapporteur of the Human Rights Council on the independence of judges and lawyers.

In her report presented to the UN General Assembly last October, Pinto recommended that member states and bar associations take actions to ensure the independence of lawyers, including guarantees against disbarment as a sanction, protection as human rights defenders, representation at international bodies and freedom from travel bans, freedom of expression and association, and non-discrimination in admission to the legal profession, among many other recommendations. It also calls on international associations of lawyers, together with international non-governmental organizations, to build networks to act in coordination and solidarity to defend and protect lawyers from attacks.

Human Rights House Foundation contributed to the Special Rapporteur’s recommendations through input gathered at consultative meetings including 50 prominent lawyers, legal professionals and human rights defenders. In 2015, HRHF released a report, Human Rights Lawyers at Risk, on the escalating climate of intimidation and persecution.

Attacks on Lawyers Come in Many Forms

Endangered lawyers are not bound by geography. “Today, in many countries of the world, it is dangerous to be a lawyer,” echoes the International Association of People’s Lawyers (IAPL) in a background paper for the Pan African Lawyers Union Conference held last October in Nairobi, Kenya. “Attacks on lawyers include both physical and non-physical interference with a lawyer’s capacity to perform his/her professional duty to the client or the court.” The paper cites numerous examples of “interference” including assassination, extra-judicial killing, involuntary disappearance, or wrongful detention often accompanied by torture. Non-physical attacks include threats, intimidation and harassment, unjustified professional disciplinary proceedings, illegal failure by the prosecution to make material evidence available to the lawyer, non-provision of legal aid, and strategic lawsuits against public participation such as libel actions.

The IAPL has sought to help develop a Pan African initiative that would deal with what appears to be an upward trend in attacks against lawyers in the African continent. The IAPL Monitoring Committee on Attacks on Lawyers also maintains an extensive blog documenting attacks on lawyers.

It reports that many organizations are coordinating to defend and protect lawyers by monitoring the attacks, publicizing the phenomena, and providing support for lawyers under attack, such as a rapid-response initiative to attend and observe trials of lawyers.

A Role for the Media

Media also could play a more robust role. More awareness raising is needed and could benefit from increased collaboration and engagement—particularly among media institutions and journalists who reveal the cross-cutting stories linking human rights and legal protections and the threats confronting lawyers who take on sensitive legal matters—to help safeguard the integrity and independence of lawyers, judges, and legal systems.

Without concerted action, the chilling effects can have far-reaching negative implications for human rights, independent media, the integrity the legal profession, and society at large. Lawyers help ensure access to justice. Their plight endangers all of us.