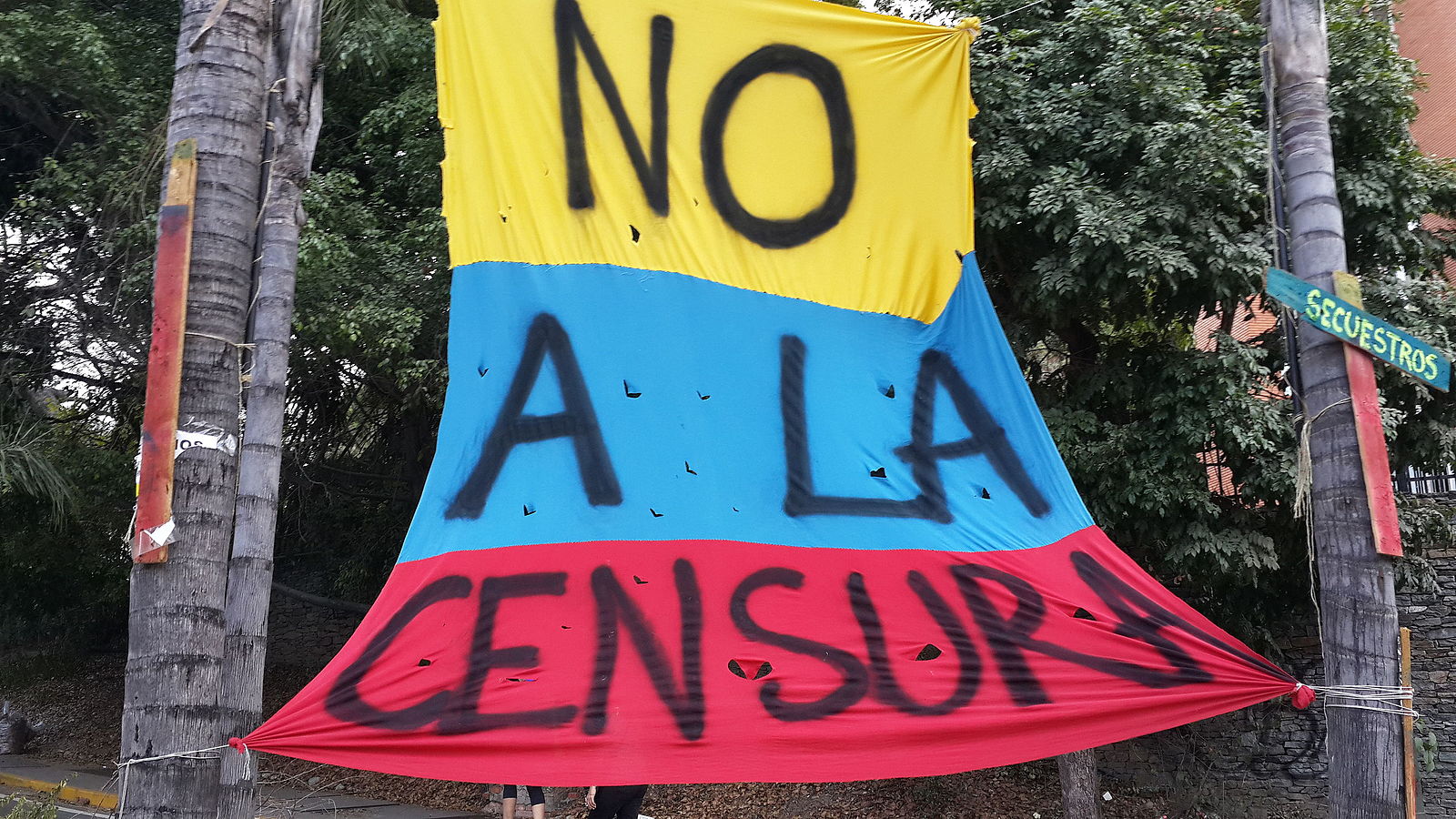 Banner in the colors of the Venezuelan flag reading "No to censorship."

In recent years, Venezuela has experienced many crises during which access to reliable and timely information has been essential, but not always possible. In 2019, nationwide power outages affected most of the country’s telecommunications infrastructure, including services that allow financial transactions, making electronic transfers and debit card payments unavailable for several days. As a result, most Venezuelans struggled to access basic necessities such as food, medicine, and even clean water, amid an information vacuum. Venezuelans also faced crucial information blackouts. The political crisis generated by the sham presidential election of 2018 triggered a sharp rise in restrictions on access to social media platforms and to several national and international media outlets.

In many instances, the political objectives behind these restrictions are crystal clear, such as preventing access to reliable information during elections, reducing coverage of demonstrations, or sabotaging opposition political initiatives. In this post I will examine how the Venezuelan regime’s capacity to restrict internet access has evolved over the years, what it means for news media and civil society, and what is being done to combat digital repression.

Website blocking is the restriction of access to one or more specific websites through technical measures, and has been practiced by the Venezuelan government for more than 14 years. In 2007, weeks after the renationalization of the country’s main telecommunications company, CANTV, and just days after the government closed the most important national television channel at that time, RCTV, a domain name system (DNS) blockade began to be applied through CANTV to digital radio stations Radionexx and Caracas Radio TV. The move specifically targeted independent media websites with the aim of preventing citizens from accessing news and information, an approach that until then had been limited to traditional, analog media.

Years later, signs of more severe measures appeared. During the 2013 presidential elections, internet access through CANTV was temporarily interrupted. Jorge Arreaza, then minister of science, technology and innovation and the country’s vice president, claimed that the interruption was meant to prevent alleged foreign hacking attempts of the National Electoral Council’s website.

What were initially isolated events progressively became a systematic policy of internet censorship. In 2017, Venezuela was, for the first time, classified as a “not free” country in Freedom House’s Freedom on the Net report, becoming the second country in the region to be so designated, along with Cuba. And, in the 2020 edition of the report, Venezuela appears as the country with the largest drop in the ranking scores during the previous five years.

Currently, dozens of national and international media websites are being blocked in Venezuela, not only by state internet service providers (ISPs) such as CANTV and Movilnet, but also by some of the main private providers like Movistar and Digitel, companies that have even been summoned to appear before the National Assembly to explain why they have been blocking these informative websites.

Demanding transparency, some civil society organizations have also made requests for public information to the National Telecommunications Commission (CONATEL), the entity in charge of regulating, monitoring, and controlling telecommunications in Venezuela, about the reasons behind these blockades. The requests have been denied or have not received an official response. However, in 2019 El Pitazo gained unofficial access to a screenshot of an email in which CONATEL allegedly ordered the blocking of the media outlet’s fourth domain (the previous three were blocked between September 2017 and August 2018). The content of that email is consistent with another one that had leaked months before, in which CONATEL allegedly ordered the blocking of the website where the Venezuela Aid Live concert was being streamed, an event organized by opponents of the Maduro regime to raise funds for humanitarian aid in Venezuela.

According to RedesAyuda‘s latest report on attacks on freedom of expression on the internet in Venezuela, new website blockings (excluding social media platforms) increased by 32 percent in 2020, compared with 2019, and almost 154 percent compared with 2018. In addition, in 2019, at least 41 blocking events were documented against 10 social media or audio/video streaming platforms. These events also affected some services associated with these platforms, resulting in a total of 110 additional blockades—a clear indication of the increase in internet censorship practices in the country.

Not only has the Venezuelan government been deploying blockades more frequently, but it has also begun diversifying its digital repression tools. Until 2018, the documented blockades were carried out through the DNS servers of ISPs, but as of 2019 other types of website blocking have been identified, such as Server Name Indication (SNI) filtering, which has been applied through the state main ISP, CANTV, to social media platforms and even other websites like Wikipedia. SNI filtering is a variant of blocking based on deep packet inspection (DPI) that seeks to prevent the browser from establishing a secure connection with the website server through the HTTPS protocol, thus preventing a user from accessing that content.

Given this, some companies dedicated to the development and distribution of tools for internet censorship circumvention such as TunnelBear and Psiphon made their services available to Venezuelans for free. Unfortunately, in response to these actions, they have also been blocked on different occasions via multiple techniques. The first incident involved TunnelBear during the national demonstrations of 2014, using a combination of DPI and DNS-based blocking of its main website. More recently TunnelBear was blocked again using the same technique, and this blockage is still active as of the time of publication. Furthermore, these companies have not been the only victims of this type of blockage. In 2018 access to the Tor Project network, used to evade surveillance and censorship on the internet, was blocked through CANTV, and some recent reports indicate that this could be happening again, although less effectively.

In some cases, website blockings in Venezuela are also combined with or preceded by cyberattacks. Examples of this are the phishing and DNS spoofing attacks on the VoluntariosXVenezuela and Héroes de la Salud platforms, carried out through CANTV during February 2019 and April 2020 respectively, with two possible main goals: to sabotage the political opposition’s initiatives and to collect information from platform users. Phishing is a type of cyberattack that seeks to trick victims into taking actions they would not normally do voluntarily, such as handing over sensitive personal information. DNS spoofing is a cyberattack whereby the victim is redirected to a malicious website without even being aware that they are not browsing the original website.

Although internet censorship in Venezuela has grown in recent years, so has the digital rights community. Now, there are more organizations that complement each other’s work and help identify the different facets of censorship in Venezuelan cyberspace by specializing in different topics: RedesAyuda and Conexo in digital security, ProBox and Cazadores de Fake News in disinformation and manipulation of digital platforms, and Venezuela Inteligente in the analysis of internet censorship. Organizations dedicated to defending freedom of the press, such as IPYS Venezuela and Espacio Público, have broadened their spectrum to include the internet as have international organizations that support the work of local ones.

However, Venezuelan ISPs will not stop blocking access to independent media websites unless CONATEL becomes a truly autonomous body from the national government, just as state-sponsored cyberattacks will continue to be carried out with impunity as long as there is no counterweight to investigate and prosecute those responsible. Stopping this policy of censorship will depend on political change that would allow the restoration of the rule of law, access to justice, and the separation of powers in the country.

David Aragort is a researcher on issues related to digital rights, freedom of expression, access to information and open internet. He has also worked as a digital security trainer for journalists, activists, human rights defenders, and other at-risk communities in countries such as Venezuela, Cuba, Colombia, and Brazil.