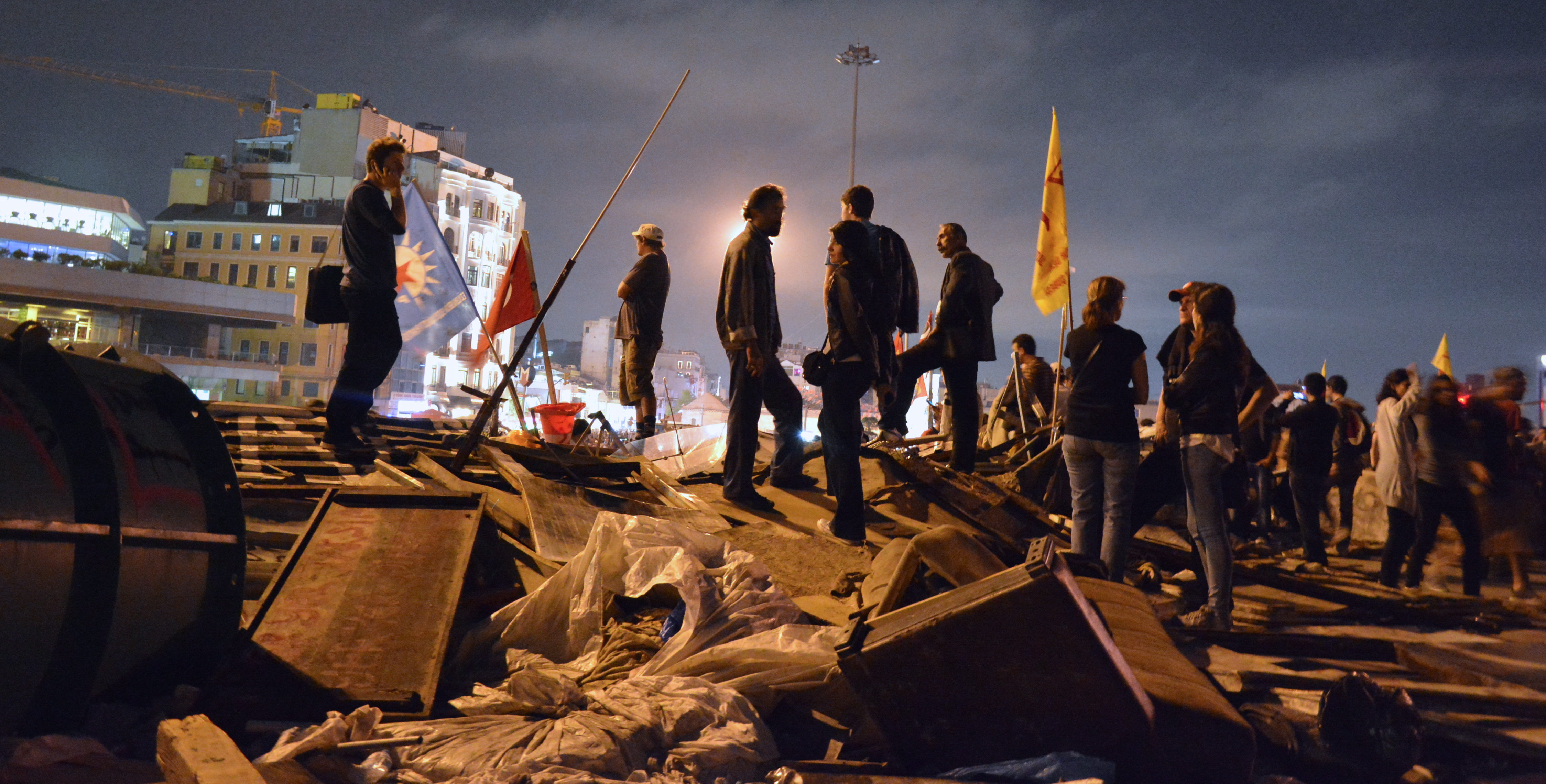 A wave of 2013 demonstrations, most notably in Istanbul’s Taksim Square, brought international attention to crackdowns in Turkey. Five years on, restrictions continue to tighten. (Photo by Meg Rutherford, CC by 2.0)

Update: Late on Wednesday, March 21, the Turkish Parliament approved the bill to give the Radio and Television Supreme Council (RTÜK) authority to regulate online broadcasting. A daunting blow to one of the country’s few remaining spaces for free expression, the regulation will require online outlets and streaming services to apply for a license in a notoriously aggressive climate of censorship and government control – impacting broadcasters ranging from Medyascope.tv to Netflix Inc. That same week, a company with close ties to Erdoğan purchased the daily newspaper Hürriyet and TV station CNN Türk, further clamping down on independent voices in the country.

In the high profile case of Cumhuriyet, Friday, March 9, offered a moment of relief in the Turkish government’s assault on free speech and the media: just a day after 25 journalists were sentenced for alleged links to the blacklisted Gulen movement, two journalists who had been held for over a year were at last released on bail.

In the onslaught against independent voices under Erdoğan, the decision was a much-needed glimpse of success, though their terror-related charges remain and the trial will move forward. Even as free speech advocates continue to wage battle in many such cases, the Turkish government now also threatens to clamp down on independent broadcasters in what limited space has remained to them: the internet.

While the trials of Murat Sabuncu and Ahmet Sik have gained international attention, they are two among thousands detained in Turkey since the 2016 coup attempt. One report found that more than 110,000 people were detained within nine months of the July 2016 uprising, with accusations ranging from terror charges for editors-in-chief like Sabuncu, to everyday citizens posting on social media platforms, to simply downloading a messenger application.

Accessing and sharing independent news has increasingly moved to safer, encrypted platforms where possible, hoping to dodge widespread self-and government-imposed censorship in the midst of a crackdown previously unheard of for a civilian government in Turkey. Freedom House’s 2018 report confirmed the continuing decline of democracy in the country, demoted to “Not Free” for the first time since the report began in 1999, while others raise the alarm on the government’s increasing pursuit of dissenters beyond Turkey’s borders.

Now, the latest in a long line of restrictive regulations aims to substantially increase government oversight of online broadcasting, seriously threatening what limited free speech and media pluralism remains. The government-led bill, already past the parliamentary commission stage, would grant Turkey’s Radio and Television Supreme Council (RTÜK) the authority to regulate every kind of internet broadcasting – a move OSCE representative Harlem Désir emphasized as not just restrictive, but also potentially incompatible with international treaties. While the bill could go to vote within the month, the government’s intentions are undeniable.

The last line of defense

As in many such restrictive environments, independent voices in Turkey have thus far persevered through the digital sphere, professional and citizen journalists alike turning to online sites, blogs, and social media. Here they produce and share news and discussions otherwise gagged by government censors and mainstream media beholden to the Erdoğan government. When individual stories are inevitably taken down by government regulators, persistent outlets republish under new headlines, VPN-flagged news sections, and pieces detailing what information had been censored.

The proposed bill, however, would extend not just to online broadcasters – some experts expect it would be applied to personal social media accounts as well. As veteran journalist Banu Guven remarked, “The new legislation aims to eliminate the last resort of independent media.”

In a trend Hungary and Turkey itself set for captured media environments, the Erdoğan government threatens to tighten its stranglehold on free speech through increasingly restrictive regulations. After all, demonstrators may very well take to the streets in protest of blatant closures and detentions; voices are less likely to be raised on behalf of seemingly bureaucratic media policy and regulations.

Turkey under Erdoğan continues to highlight – and even sometimes pioneer – the most efficient path toward a captured media system. Often, such gutting of the free press is instilled through regulations, building on top of one another until little free space remains. These restrictions are then compounded by the near-impossible challenge of financial viability in a biased ad market, alongside increasing intimidation tactics and self-censorship.

Yet, the case of Turkey also highlights the critical importance of those standing for free speech and independent media, especially in the midst of authoritarian consolidation. If necessity is the mother of invention, journalists, voices of opposition, and free-thinking citizens have pulled out all the stops. Audiences in repressive environments like Turkey are moving to different platforms to access and share independent, credible news, and the journalists and outlets who know best how to (safely) reach that audience will find the greatest impact. Major platforms should also be aware and receptive of this, especially as online broadcasters face increased threats under the proposed regulations.

These pieces are key not just to understand censorship and capture in Turkey, but also to recognize, prevent, and counter similar and growing concerns elsewhere. And for journalists in the field, statements of support begin to ring hollow without a tangible effort to curtail the crackdown. “I’m fed up with praises, don’t tell me any good words,” stressed Diken editor-in-chief Erdal Güven in a recent meeting. “Tell me what you can do.”