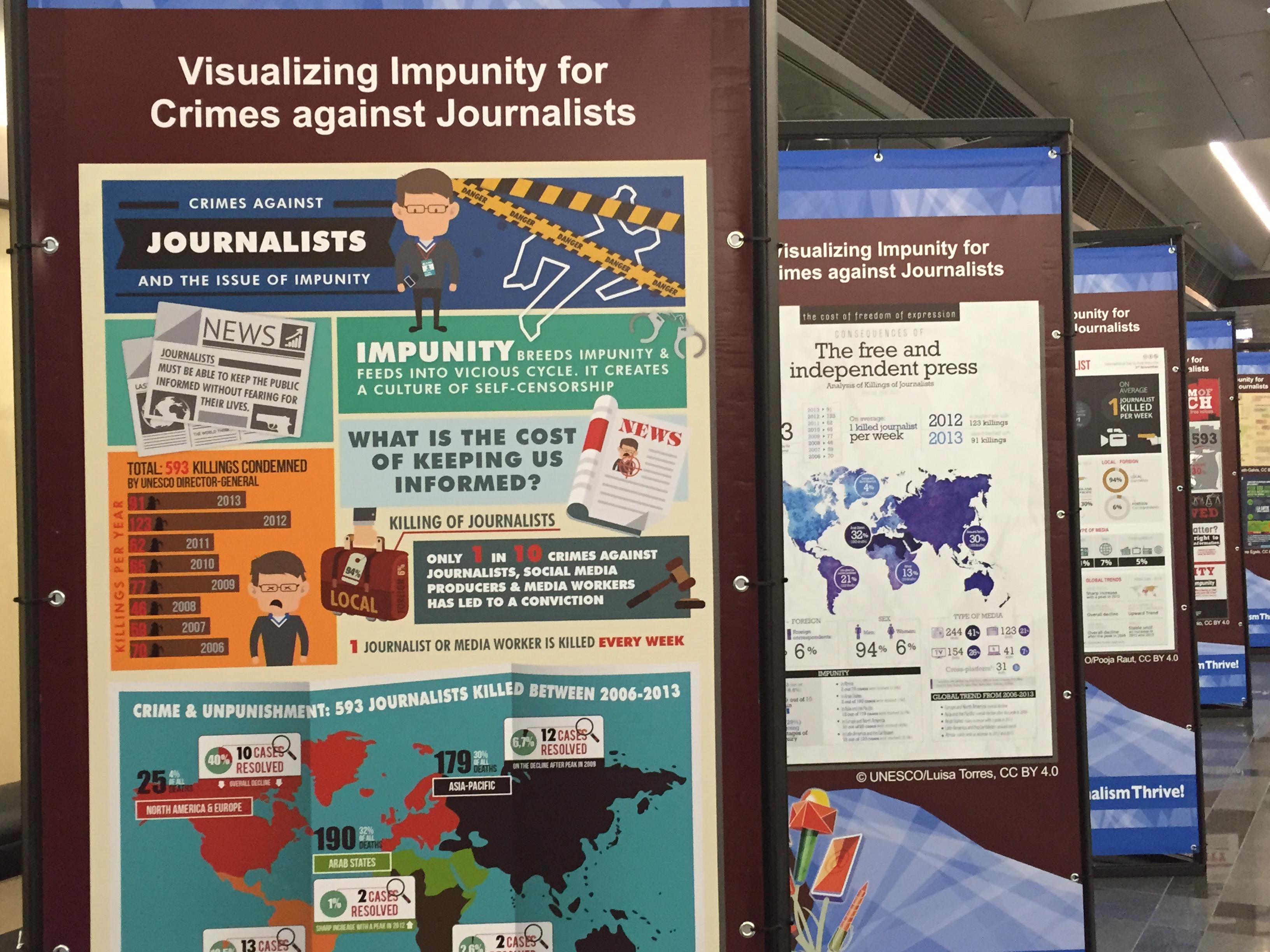 If anyone needed to be convinced about the importance of press freedom, the events surrounding World Press Freedom Day on May 3 provided ample evidence. Just days before the meeting, Freedom House reported that its annual global press freedom index had suffered the sharpest decline in a decade.

To top it off, WPFD 2015 was celebrated this year on the front lines of what many see as an epic battle for press freedom. Latvia, a small country sandwiched between Russia and the Baltic Sea, is caught in a windstorm of propaganda aimed at Latvia’s Russian speakers. More than a third of Latvia’s population get a daily diet of TV and other media from Russia that, as one Latvian official said at the meeting, “tries to convince Russian speakers that they cannot live together with the rest of us, that they are under threat.”

With this dramatic backdrop, WPFD felt less like a celebration and more like a gathering of an embattled community in the midst of crisis. While there were some lighter moments, much of the news was about the formidable challenge that now faces the global media. There was also a “Riga Declaration” that summarized the discussions and difficult challenges to be confronted.

Here are five of my top takeaways:

The free press advocates gathered here were no fans of the idea of fighting Russian propaganda with more propaganda. Yet a number of creative initiatives were on display of how journalists and media entrepreneurs are hoping to offer an alternative to the twisted messages coming from Moscow. One full day of pre-conference discussions were devoted to this topic. These panels included not only testimonies from independent Russian journalists who are still struggling–and dying–to get the truth out, but also from purveyors of new external initiatives aimed at sending real news back to Russia.

With Russian second only to English as a second language among EU citizens, who provides the news to Russian speakers is of no small significance. One example being developed here in Latvia is the Meduza Project (meduza.io), a privately owned website that aims to cover issues in an independent way for the Russian market. Editor Galina Timchenko who was kicked out of her last job as editor of lenta.ru says her goal is to simply provide factual coverage of the news. Russia is putting out “a stream of fictional threats, but no real news on what’s really happening in the world,” she says.

One of the main functions of the WPFD event is to create a marketplace where media development donors meet and engage with implementers. This year, despite the talk here of a gathering storm for independent media, there was a clear sense that the implementers were chasing after a dwindling pot of funds. While Denmark announced a $2 million program to be implemented by the WAN-IFRA, and the Netherlands was renewing a major multi-year program with a consortium of partners, many participants felt these programs were a drop in the bucket, particularly given the strong demand from countries financing increasing threats to freedom.

All this demand resulted in giving any organization with a bit of money a huge platform to pick and choose. The appearance of representatives from Sweden, the Open Society Foundations, and other potential funders was like the arrival of rock stars among adoring fans.  But opinions are mixed about where the funding levels are actually headed for media development work. CIMA is currently planning a series of donor profiles and studies on media development funding to see just where we stand and where we are headed.

One key theme that emerged was the growing awareness of the ways that governments, political parties, commercial interests, and criminals are increasingly capturing the media across the world and limiting free expression. The Media Ownership Project gave an overview of its activities, which consists of monitoring ownership patterns in 11 Eastern European countries and looking into the motivations of those owners. So far they have researched the owners of 503 media outlets, of which 188 have hidden ownership, 127 owned by politicians, 50 owned by people with links to organized crime.

This presentation was part of a strong call at WPFD for more transparency in the ownership of media outlets, and for laws to require disclosure of ownership and other financial data about the media. Political parties in Hungary, for example, think owning media makes them more successful in winning elections, Tamas Bodoky, editor of lasso.hu, said at the session, “That’s why they want to own their own media and drive their own agenda.”

Another recurrent theme at WPFD this year was the growing concern about how much investigative journalism is suffering in the current political and business environment.  Nevertheless, participants heard many stories about innovative approaches and ways to get around the funding gaps. Matt McAlister, manager of Contributoria.com explained how that upstart initiative had successfully crowd-sourced the funding of serious investigative projects  that allowed the audience not only to participate in the funding but to help in the investigation, providing valuable feedback and information. Paul Steiger, founder of  ProPublica, reported how the U.S.- investigative non-profit had been able to diversify its funding from its origins with a single large donor to have more than 2000 donors of all sizes, and budget that has gone to $12 million, up from about $10 million in previous years.

While World Press Freedom Day has been celebrated every year since 1993, this is the first time one of the hosts issued its own postage stamp to commemorate press freedom. With Latvia on the front lines of the battle against Russian propaganda, the stamp is just the latest salvo in Latvia’s attempt to bolster its image as an advocate of democratic values. The organizers of WPFD included a stamp and a postcard in the arrival packet of every conference participant. But for the mostly foreign crowd at the event, the gift created a bit of frustration: The amount of postage was only enough to send a letter or postcard to someone in Latvia. “You’ll need to add postage if you want to send the postcard back to your home country,” UNESCO’s Guy Berger told the crowd. At least Latvians can share the image when they pay the bills for this big event.