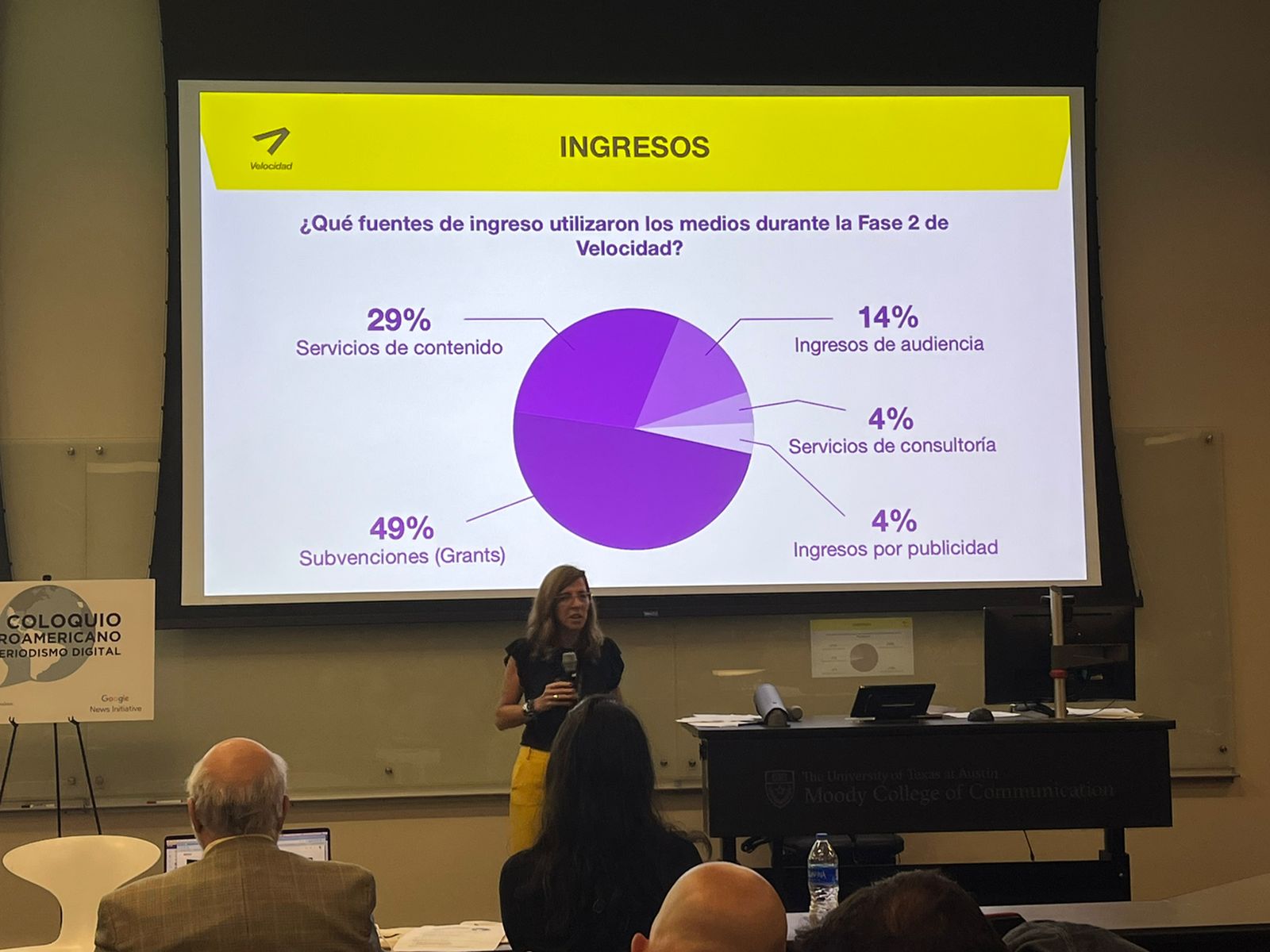 The Center for International Media Assistance has long focused on promoting the sustainability of independent media worldwide as one of its core values and areas of activity. A current project called Velocidad serves as a clear example of efforts by international donors to foster the economic sustainability of media in Latin America. In this blog post, Velocidad Director Vanina Berghella, a journalist who specializes in media management and digital communications, describes the project. Her comments have been translated from Spanish and edited for brevity and clarity.

Describe the Velocidad program. What are its mission and methodology?

Velocidad (Velocity in English) is an accelerator that enables entrepreneurial media in Latin America to grow, develop and improve their financial sustainability. The program provided news outlets support to develop new sources of income and become more financially sustainable and independent. Based on an assessment of their viability, scalability, and growth potential, we selected 10 outlets to undergo six months of acceleration. After evaluating their progress, we then chose six of them to complete an additional 10-month acceleration phase with more funding and support from consultants. As a result of our funding, as well as our strategic and tactical consultancies, the outlets that participated in the program developed several new types of products and services to generate new sources of income.

There are other donor-funded programs in Latin America designed to foster the economic sustainability and journalistic capacity of media outlets. How is Velocidad different from those other efforts?

Before developing Velocidad, we researched several other media accelerators, such as Media Factory (based in Latin America starting 10 years ago), Matter (launched in the United States), among others. When we developed our own acceleration model for Velocidad we decided to do several things differently, starting with offering virtual consulting so that media leaders would not have to travel to live in another city for three to six months, as was common in other pre-pandemic programs.

In addition to granting funds aimed at implementing the changes needed for growth—this can range from hiring specialists to using new platforms and investing in their social media—our methodology stands out because it tailors its consultancies to the specific needs of each media organization. Our team of five strategic consultants were focused on monitoring and supporting the outlets in the implementation of their action plans as well as in executing and managing budgets. They participated throughout the whole acceleration process. More than 50 tactical consultants were brought in to help the media outlets in specific areas, such as metrics and management. This allowed a constant, deep, and cross-cutting knowledge exchange.

How do the journalists and media managers react to the program? Is it difficult to engage them in the program?

This process initially presented a huge challenge for them and for us. The vast majority of the leaders and founders of entrepreneurial media outlets are journalists, and their main focus has always been on publishing and content production. And, although this aspect continues to be at the heart of each media outlet, addressing the other areas (finance, audiences, technological development, among others) was put off. During the acceleration, we seek to demonstrate the need to change their internal culture in this sense and highlight the value of investing time and money in these areas. In addition to the specific consultancies in each productive area, each media leader focused on adapting this new knowledge to the outlet’s culture. Throughout different instances of the program, many of the media leaders we worked with highlighted the profound transformations that Velocidad generated in them and in their organizations.

How do you measure success?

Velocidad’s success was measured through a methodology of qualitative and quantitative monitoring. Among the quantitative aspects, I can say that, due to the accelerator’s investment, the overall income generated by the participating outlets was multiplied by a factor of six, totaling $5,198,180. To accomplish this, Velocidad’s media partners generated nearly 400 new sources of income during the program. In addition, the media outlets incorporated more than 50 tools into their daily work, such as customer relationship management software to manage their memberships or new payment platforms to receive donations, and more than 200 changes were recorded within the organizations in relation to equipment and processes.

In terms of qualitative measures of success, during the program, the media organizations carried out relevant coverage that resulted in more than 10 instances of social impact in their communities. The quality of reporting was measured, too, in order to track the impact that the improvements during Velocidad had on the daily editorial work of the outlets. We confirmed that the growth that the outlets experienced reflected in the quality of their content.

Give us an example of a successful program.

Just one example could be that of CIPER, a Chilean investigative media outlet with a long history and a very robust team of journalists. CIPER created a sustainability department, which promoted its incipient membership model and allowed it to guarantee its financial survival and keep its work afloat. The membership model now accounts for 70 percent of CIPER’s income.

To achieve this, CIPER worked with the consultants to create a work plan that included drawing up marketing strategies, implementing a customer relations management and partner-tracking system, and providing team training in different areas related to user loyalty. Along with this work, they carried out other activities aimed at fostering the outlet’s growth. As if that were not enough, during the acceleration, CIPER published outstanding journalistic coverage. In order to meet one of Velocidad’s initial objectives, sharing what we learned throughout the media ecosystem, CIPER’s success is highlighted as one of six case studies published on Velocidad’s website.

Do the needs of the participants differ depending on the enabling environment for media?

The principal need of all the media organizations that participated in Velocidad was to pave their way towards financial sustainability in the medium and long term. However, it is true that each outlet faced additional, different, and very particular challenges according to its political, economic, and social context. Our grantees were based in a variety of different contexts, including Brazil, Chile, Argentina, Venezuela, and Paraguay. The excessive inflation in Venezuela and Argentina, the complexity of the lack of freedoms in Cuba, and the social conflicts that have occurred in recent years in Chile and Colombia are some examples of this. If we add to that the arrival of the COVID-19 pandemic, the acceleration process was affected by several of these external factors. For example, in the case of Posta and Red/Acción, both based in Argentina, the challenge of inflation led Velocidad to provide the media outlets courses and consulting focused on helping them create mid- and long-term financial strategies to address the country’s rocky economic context.

What advice would you have for organizations setting up accelerators in other regions?

It is possible to replicate the Velocidad acceleration methodology in media from other regions. In its first edition, the program contemplated economic, social, and political aspects of each organization’s country, as well as audience habits, and adapted strategies to better address each one. However, in those countries and regions where social or political conflicts are predominant or where there are obvious limitations to freedoms, the degree of difficulty in implementing the program is always greater and requires that the specific consultancies be aimed at supporting the media in tackling those challenges.

A recommendation for any accelerator, no matter where it’s developed, is that funds be complemented with tailored consultancies that consider the particularities of the outlets. We identified four main axes that we think are key to structuring an acceleration: finance, audiences, products and technology, and management.

The lessons learned from Velocidad are already being put to use in other projects. In 2020, SembraMedia presented two more media accelerator projects: the Google News Initiative Startups Lab Latin America, and Amuna Digital, which is financed by the Meta Journalism Project and will focus on Argentina. Although these two proposals differ from Velocidad in the volume of investment, the length of the programs, and other issues related to the scale of the media outlets, they have also been able to take advantage of improvements in their acceleration processes derived from Velocidad.