“Free, but not independent”: Voice of America’s Myroslava Gongadze on the challenges ahead for news media in Ukraine 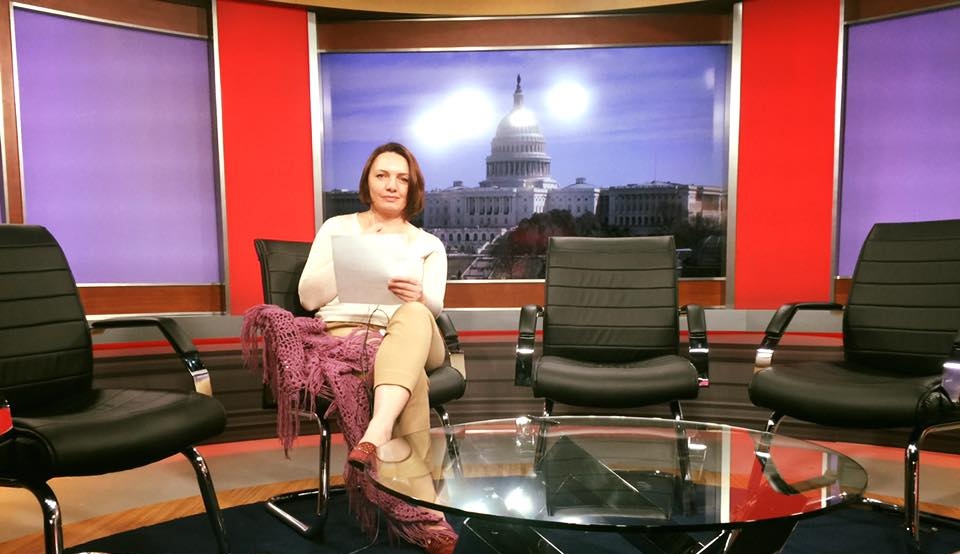 Ukraine’s media sector seems be the subject of dueling narratives at the moment. The launch of a public broadcasting service under trusted leadership gives the impression of momentum in the sector. On the other hand, the country has also made little progress at breaking the financial power that political oligarchs continue to wield over most major media outlets, according to recent assessments by both IREX and RSF. Last week I sat down with Ukrainian journalist Myroslava Gongadze from Voice of America’s Ukrainian service to discuss reasons for optimism, but also concern with Ukraine’s media future.

As the chief of Voice of America’s (VOA) Ukrainian service, Myroslava Gongadze oversees VOA’s partnerships that provide content for both public and private Ukrainian television and radio stations, and she also manages VOA’s Ukrainian content online. Originally from Ukraine herself, Gongadze has been based in the United States since 2001 when she sought political asylum after the murder of her husband, the investigative journalist Georgiy Gongadze. It was in 2004 that she began working at VOA. During the course of her tenure, she has covered every event from the Orange Revolution in the mid-2000s to the current political turmoil that began in late 2013. Along the way, she has won many awards for her work, including the Gold Star of the Hero of Ukraine award, which was bestowed on her in 2016 by Ukrainian President Petro Poroshenko. At the ceremony, the president commended her for her bravery and “development of independent Ukraine, protection of the freedom of speech, fight for the development of independent mass media.”

This interview has been edited for length and clarity.

What is the current media situation like in Ukraine? How do most people get their news?

For different generations, it is different. Television still is the primary source of information in Ukraine, especially for older generations and those in smaller towns and villages. But younger generations are consuming news from social media. I can see it even from our audience at Voice of America, we are focusing on digital because we see that [social media] is the primary way people share information, and Ukraine is part of that larger world trend. There are still issues with the level of Internet penetration in Ukraine. It is growing, but it is not yet on the level of South Asia, or even Africa.

One way I have heard Ukrainian media described has been as “free, but not independent.” This means that although there is legally a free press, media independence is often impinged upon or outright disregarded by oligarch owners pushing their own agendas. Do you agree with that?

Yes, absolutely. The issue with Ukrainian media is that it has never become a sustainable business so the majority of the media outlets are owned by oligarchs—especially the media outlets that need lots of investments. Right now, we actually see the growth of news outlets, like all day news TV stations like 112 TV, ZIK TV, and Espresso TV. They are owned by different oligarchs and there is not enough transparency in the media ownership. That is the huge issue. Basically, between elections Ukrainian media and Ukrainian journalists can feel freer. But during elections, they clearly work for someone who owns them. Oligarchs or people who have political influence, or want to have political influence, or strictly just politicians or members of parliament who own them, they use their media [outlets] as a tool to promote political or economic interests. So that’s the huge problem in Ukraine.

From what I understand, President Poroshenko still owns a TV station (Channel Five), and although he has made some efforts as President to distance himself from other oligarchs, it appears that he may not want to give up ownership of this station because he might isolate himself from other people of influence he may need as allies in Ukraine?

I would agree with that. And I should note that we actually work with Channel Five. At the same time, as a leader he should set the example and actually do what’s best for the future of Ukraine and the future of free media in Ukraine. I mean, Channel Five is working pretty well, I don’t really have issues with them and we are very good partners and they are pretty independent. Right now they say that the president doesn’t have any influence on the station. Is it true or not? I’m not the judge at this point, but I think the president is the one who should set that example.

Voice of America seems to have a fair amount of influence in Ukraine.  What are the ways VOA broadcasts and connects with Ukrainian audiences?

We are one of the most trusted media in Ukraine. Nine out of 10 Ukrainians say they trust us as a source. Why? Part of it is tradition. Ukrainians always look outside for the truth to give them some oversight view of what is going on inside Ukraine. Second, we are very fact-oriented. We try to show the Ukrainian media the importance of quality information. We are not a breaking news outlet. We try to give analysis. Basically, information from overseas and how foreign politicians and foreign experts see the developments in the country. We try to look at international news through the lens of our audience and find something that they would be interested in—something that would affect the life of an ordinary Ukrainian. We see the audience appreciates it. We are platform agnostic; we work on every platform.

Seventy Ukrainian television stations are broadcasting our TV programs. We are trying to focus on different audiences as well.  Why do we work on Channel One (Ukraine’s public television station)? Because they have the biggest TV penetration in Ukraine, and they reach every single small village in the country. Then we broadcast with Channel Five as a news channel. We started that partnership during the Orange Revolution and we stuck to that partnership because it is one of the main news channels in Ukraine. We also have a show in Russian, which we started after the Russian aggression in Ukraine that is specifically for the eastern regions. Our Russian show is a short newscast, but it goes to Mariupol, Odessa, and small towns on the border near the warzone. We understand that for those populations, it is still easier for them to hear the news in Russian.

What will the future of Ukrainian media look like a decade from now? Two decades from now? Will the media environment look very different?

I don’t think it’ll look very different, but I do foresee a digital-first strategy. In terms of media freedom, if [the country] is able to make the reforms that are necessary related to media ownership and the general business environment in Ukraine, it will be better. Hopefully media will become a successful business. I would like to see Ukrainians understand that we have different types of media, and even with different views and different political affiliations, but at least we can clearly know who is who and who they represent. So hopefully that’ll happen in Ukraine. I think the country can’t go backward, the way backward is complete destruction. So, the only way is the way forward, and I think it will become a more or less democratic country.

For those interested in discussing the media situation in Ukraine in more detail, on Friday April 28th CIMA will be hosting a panel featuring Ukrainian journalists and representatives from national broadcasting associations—“Ukraine: Can Trustworthy Media Win?” Please RSVP if you would like to attend.