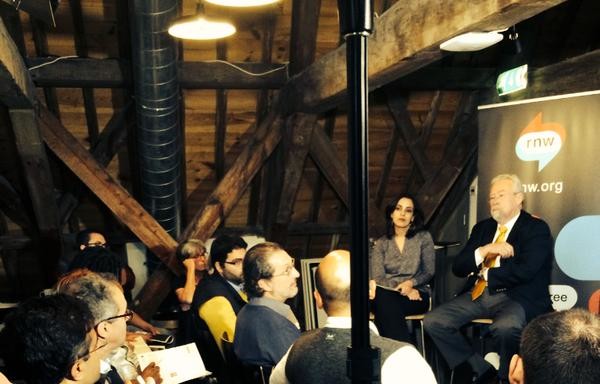 For a U.S.-based former journalist who hasn’t worked in the Global South in many years, mingling at the Global Conference on Cyber Space in The Hague this week was a stark reminder of how fortunate American journalists are. The stories I heard from journalists from Angola to Zimbabwe (speaking both figuratively and literally) were in turn heart-breaking and teeth-grinding. It’s a wonder any of them even want to be journalists at all.

In addition to the two African countries, I talked with journalist from India, Pakistan, Mexico, Venezuela, the Democratic Republic of Congo, Serbia, Russia, Kazakhstan, Ukraine, Morocco, Turkey, and several more countries. It was a welcome opportunity to put names and faces on journalists like these, as now that I work in media development, information about the dangers to journalists tends to become mind-numbing stream of statistics and alerts from organizations such as CPJ, RSF, and Freedom House, which are doing their best to protect journalists like the ones I met.

Two in particular stood out: Martin Pallares, an op-ed columnist for the Ecuadoran newspaper El Comercio, and Hala al Dosari, a Saudi blogger well known for participating in the movement for Saudi women to drive cars by just doing it.

Pallares talked about how Ecuadoran President Rafael Correa insults him regularly in his televised addresses, holding up a large picture of him.

“My kids hear talk about it in school and they’re afraid,” he said.

Hala was my fellow panelist when I presented a CIMA report, Watchdogs Under Watch: Media in the Age of Cyber Surveillance.

At a “Hague Talk” the following day she expanded on remarks she made earlier on the hardships of working in her country, especially for a woman.

“In Saudi Arabia, the Internet is turning into a hunting ground,” she said. “Is it safe to share our minds online? The answer is no.”

She added: “The government has a monopoly on opinion…they think of having an opinion as an act of terror.”

Stifling free speech in the name of fighting terrorism is a method many countries are adopting. It was uplifting to hear that so many journalists working in the trenches are standing up to this—even if they’re not always successful.