Also Under Siege in Ukraine: The Media 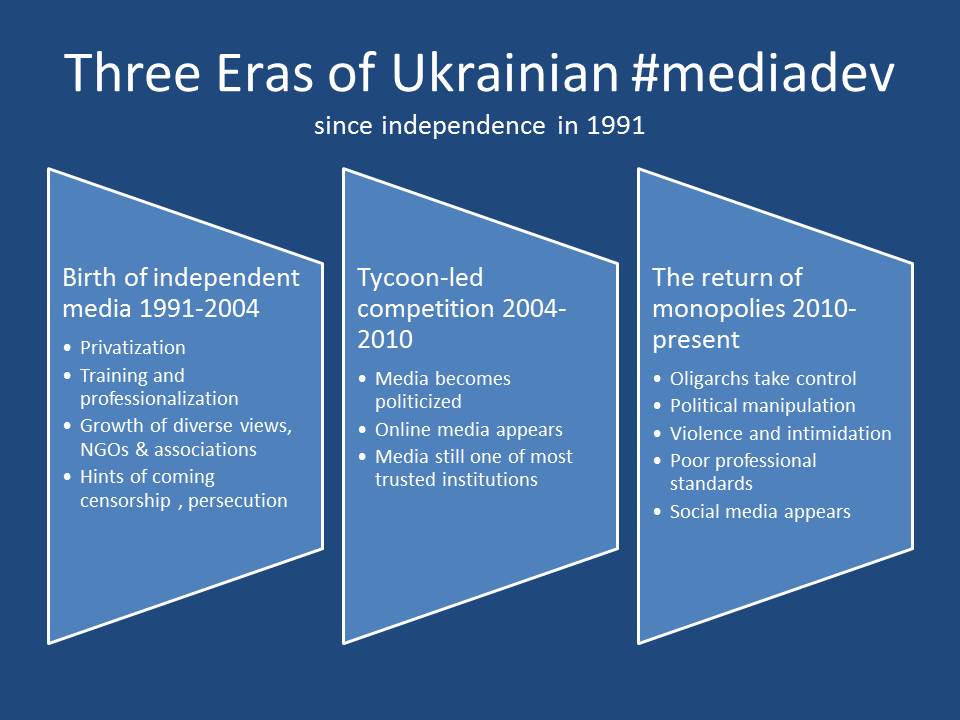 With the crisis in Ukraine still at full boil, it may seem an odd time to start thinking about problems in its media sector. But a closer look at this crisis puts media front and center. And when it comes to reflecting about what the international community can do to ensure that Ukraine eventually has a chance at creating a free and independent media that can help the country steer a more stable and sustainable course, the time for thinking is now.

In the 23 years since Ukraine gained its independence from the Soviet Union, Ukraine made important strides, particularly in the early years, in creating the foundations of an independent media sector. As in other formerly communist countries in Central and Eastern Europe, the movement towards independent media was an important part of the country’s transition to a market-based economic system. Donors and the international media development community played a critical role in helping to make this happen.

But as Ukrainian events in the last few years have shown, that transition was far from complete. The gradual capture of the media by oligarchs and political elites is part of the rot that allowed corruption to flourish, public finances to be mismanaged, and linguistic, economic and cultural divisions in the country to be amplified. Today, as Russia mounts a full-throttled propaganda campaign to bolster and rationalize its intervention, the local media risks being mainly a tool of conflict, rather than a provider of independent facts and analysis.

It’s all too reminiscent of other conflicts that caught the international community off guard, including the media-charged crises in former Yugoslavia, Rwanda, and Egypt. In each of these cases, the media was a major player in propelling the conflict forward, and the failure to recognize the central role of the media meant that efforts to resolve the conflicts were often half-baked.

The roots of the problem in Ukraine go back to the unfinished business of the transition and the gradual reduction of donor support to media development in the first decade of the 21st Century.  Iryna Gubarets, a project officer at the Canadian Embassy in Ukraine, mapped out this changing media support environment in a presentation in late January to the Governance Network (GovNet), one of the working groups under the auspices of the Development Assistance Committee, an organization of 29 of the world’s major donors countries.

The rise and fall of the Media Sustainability Index in Ukraine is another way to see the story in graphic detail. After rising dramatically at the beginning of the transition, the MSI takes a plunge in recent years. Ukrainian journalists have noted that the fall in the MSI pretty much mirrors the fall in donor support for media development. Enlightened and sustained media assistance to Ukraine, both in the short term and in the future, could be a major contributor to the overall success of any stabilization process. Improving the flow of trustworthy information and tracking the use of donor and Ukrainian resources would be a huge contribution to the country’s prospects. But creating a truly independent and professional media sector will be a long-term project, and measures will need both local support and outside funding. Possible interventions were detailed in earlier CIMA publications and include measures such as the following:

None of this is a panacea for the quickly changing crisis. But as we learned in other major crises, we ignore the role of media at everyone’s peril.