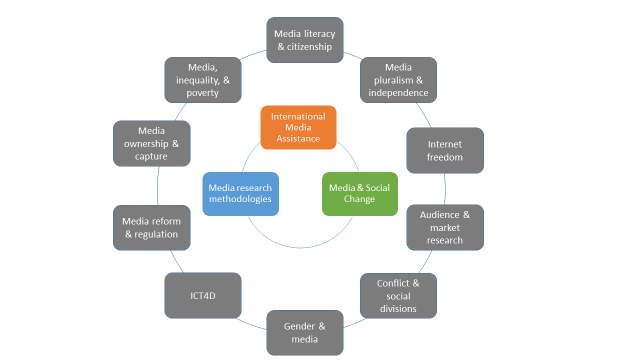 By Paul Rothman and Nick Benequista

With the news industry already weakened by the collapse of its advertising-based business model, journalists around the world are also threatened by the emboldened efforts of authoritarian governments and violent non-state actors to silence them. But what’s more, the techniques used by the powerful to limit what citizens read, see, and hear have evolved, while the strategies for protecting journalistic independence have not.

Researchers can help to solve this problem, but only if media development is better defined and supported as a research field. In democracy promotion, public health, anti-corruption, and other fields of international support, researchers have helped to tear down misconceptions and failed approaches and usher in more innovative and effective support strategies. But for researchers to play this transformative role in the field of international support to media development, a great deal more attention to the topic from a much broader array of perspectives is needed. CIMA—together with the Global Forum for Media Development, the University of Westminster, the University of Leeds, and other partners—have been working on this issue, most recently hosting an event in Cartagena, Colombia that has galvanized interest in a media development research community.

Unlike in other sectors of development, such as governance and public health, media development has no cohesive community of scholarship that can help us understand and address new challenges or develop new ways of thinking in the quickly evolving and complex media space. The weak linkages to scholarship around media development issues are not because such scholarship does not exist, but rather because the scholarship is scattered across academic disciplines. One can find important research related to media development at academic conferences for communications, political science, anthropology, and many more. Giving the keynote address at the conference, held just before the annual gathering of the International Association for Media and Communication Research (IAMCR), Professor Silvio Waisbord of George Washington University described the challenge as “bringing order to the chaos,” calling for media development to be seen as a distinct field of research specialization.

The question is how to unite these threads of research in a way that can build a more united community of scholarship and provide a stronger intellectual foundation for media development donors and practitioners. During the second day of the conference, participants engaged in participatory workshop to find answers to the question: what can we do to build a stronger research community?

A reoccurring theme of the discussion was the need to identify a unifying research agenda, common theoretical frameworks, and clear and unique concepts around which such a community could develop. Guy Berger, the director for Freedom of Expression and Media Development at UNESCO, emphasized the “…need to identify a few areas of focus.”

In one of the day’s exercises, each person wrote an important research topic related to media development. With hundreds of topics identified, the group collectively organized them into 12 categories:

Recognizing that even these 12 categories were too broad to provide a unifying agenda, the group distilled them further still into three concerns that could be used to define media development as a research field: Building a community of scholars and practitioners around media development, however, will require much more than a few mapping exercises. It will require concerted efforts for communication and coordination, new incentives for collaboration between researchers and practitioners, reliable sources of funding, and strategies to ensure that the research has an impact.

To foster communication among scholars and practitioners, the participants determined that an online platform would be needed to aggregate research, funding opportunities, and calls for papers, while a Google Group listserv (sign up here) has been established to facilitate information sharing and discussion among media development researchers. In addition, the group committed formally integrating as a working group at the IAMCR and to partnering with select scholarly journals to give media development research a home in the publishing world.

Greater emphasis on knowledge management and research synthesis in the field is also required. To that end, the group committed to focus next year’s gathering of the network around a small series of papers that summarize the state of knowledge in the field to avoid rehashing old debates.

Finally, in order to obtain more reliable sources of funding for research on the topic, and to leverage the possibility of low-cost scholar-practitioner collaborations, CIMA, the Global Forum for Media Development, the University of Westminster, and other partners committed to developing a two-page strategy paper, drawing on existing efforts to build knowledge around media development. While building networks and communities of scholarship and practice is no easy feat, there are important recent examples from which we can learn. As Guilherme Canela de Souza Godoi of UNESCO notes, “we should really look at the internet policy community— they’ve really united research and policy effectively in a multi-stakeholder environment.” The internet policy and governance community has been hugely successful in raising the profile of the field, and pushing the agenda at the highest levels of national governments.

If media development researchers can unify around a common agenda, build stronger bridges between scholars and practitioners, and communicate its knowledge meaningfully to policy-makers and donors, international media development might just yet emerge from this crisis in time to help save journalism.

Nicholas Benequista is the Research Manager & Editor at the Center for International Media Assistance.