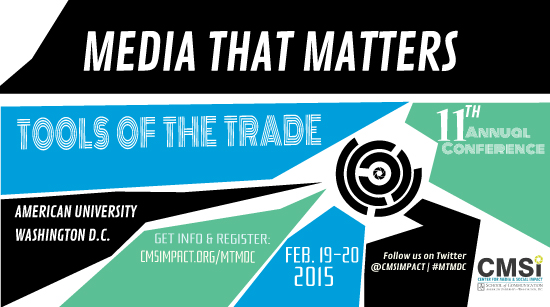 This year, the Center for Media and Social Impact (CMSI) at American University will hold its eleventh annual Media That Matters Conference, a gathering of “established and aspiring filmmakers, nonprofit communication leaders, funders, and students who want to learn and share cutting-edge practices to make their media matter.”

The theme of this year’s conference is impact and measurement.  Presenters from a wide variety of organizations and media outlets will discuss ways in which to more strategically think about the social engagement and impact of media campaigns and content, and one workshop will focus on how film and video can be used to advance social causes.

Patricia Aufderheide, Director of CMSI, says that these things are important to discuss because sometimes even really good filmmakers are “not really great at the engagement part.”  It’s not enough to produce the content— there has to be a way to measure its effectiveness.

While a lot of the conference will focus on film and video production, Aufderheide thinks that it would benefit those involved or interested in media development, as well.  She says, “This is a very, very hot issue for funders, and it’s also an issue that has come up with people discovering the power of social media… We’re only at the beginning of being able to do this.  We’re learning from each other.”

She also brought up the issue of localizing strategies, which could benefit those working in development.  “The strategies that are talked about here are not strategies that depend on the location, but they need to be thought about in the context of the particular area… In some places radio may be a better way to reach people while in others social media may be better.  You always have to think about inequality and access,” she says.

Looking at the bigger picture, Aufderheide is interested in the data and what it says.  “There’s no bad data.  There’s only bad analysis… There should always be some kind of way of harvesting information on how you did.  But you should also think about the limitations of that data,” she says.  This kind of thinking is integral to improving the effectiveness of media development projects around the world.

This year’s Media That Matters Conference will be held at American University in Washington, D.C. on February 19 and 20.  You can register here.