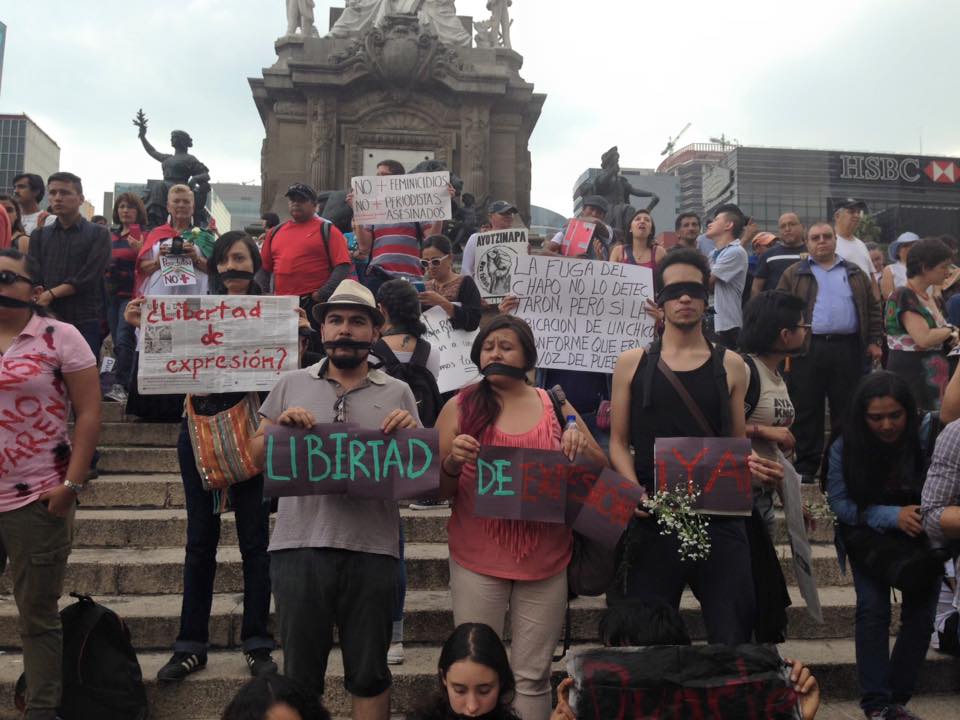 Rosario Carmona is Mexican journalist in the United States as a 2014-15 Hubert H. Humphrey fellow at the University of Maryland. The views expressed here are her own.

One response to the attacks and threats that journalists are facing in some states of Mexico for their coverage of the war among drug cartels, collusion between organized crime and governments, corruption, and violence has been silence.

Since 2000 there have been 103 murders, according to the Special Prosecutor for Crimes against Freedom of Expression’s report published on July 31, 2015.

This year has also seen and increases in the number of attacks, kidnappings and threats, which are never punished. Such impunity serves as an accomplice for those who oppose freedom of expression.

Yet silence remains the response of the government at all levels and by the media themselves. One consequence of this self-censorship is a divorce between journalists and the public. Journalists are losing credibility and there is a lack of support for journalists who are victimized by violence.

While traditional media decided to stop providing relevant information as a means to protect themselves from the attacks and threats, the lack of information has turn led to a rupture with the community, which has had to find new ways to be informed.

In places like Veracruz or Tamaulipas, for instance, many people started using social media networks to stay informed. Citizen journalists appeared and they too became victims of retaliation.

The case of Moisés Sánchez is a perfect example.

Sánchez, who earned his living by driving a taxi in Medellin, a small town in the southern state of Veracruz, started publishing his own magazine because the traditional media wasn’t interested in the issues of his community.

While he was driving around his town he was taking reports then he published it in his magazine.  With the money from his job as a taxi driver, he paid the magazine production that he distributed in his community for free.

Starting in 2014, the taxi driver-turned-journalist wrote about the increased violence, murders, kidnappings and extortions until January 2015, when he was reportedly abducted by a group of gunmen. He was in his home when the group arrived there and stole his computer, camera, and documents.

For three weeks, he was missing. Finally his body was found and the authorities reported that the town’s mayor, Omar Cruz, was the one who ordered the policemen to carry out the crime.

For the authorities, Moisés Sánchez was not a journalist; he was just a taxi driver. However, he did an important job for his community, as many other journalists or citizens who work to inform the public and become victims of  organized crime or the government because of that.

Now even social media is an actor in the chaos.

In some cases the drug cartels use their own webpages in order to publish the information, messages, or alerts that they want to spread.

In places where to inform through the media is just impossible, the use of pseudonyms in social networks is common. “People need to protect themselves and hence report anonymously,” said a journalist who works in a dangerous region in Mexico. “It is understandable, but the risk is increasing because the criminal groups use the same channels to publish their own information and also to attack or threaten journalists and citizens.”

People don’t believe in media just as they don’t believe in the versions that governments give us about important cases such as the disappearances of 43 students in Guerrero, the massacre of civilians in Tlatlaya, Estado de Mexico or, most recently, in the escape of drug’s lord Joaquín “Chapo” Guzmán from a high security prison.

Ridicule and disbelief was the reaction of the public when Mexican governments tried to explain how the so-called “one of the most dangerous” criminals could build a tunnel and escape for second time from prison without anyone noticing it.

Other cases have tested the reaction of government and media to the violence, such as the murder of photojournalist, Ruben Espinosa. He was living in exile in Mexico City because he received threats in Veracruz, where he was working as a correspondent for national media.

Some days before Ruben’s murder the governor of Veracruz, Javier Duarte warned journalists to behave well. Civil society organizations, media, and journalists all over the whole country took the statement as a threat.

The result of these threats and attacks is self-censorship and distrust are widening the gap that separates journalists from people every day.  Each time a journalist is killed, or a media organization is silenced, or an ordinary citizen is attacked, all of us lose out. We don’t just lose the right to be informed or to inform. We lose much more than that.