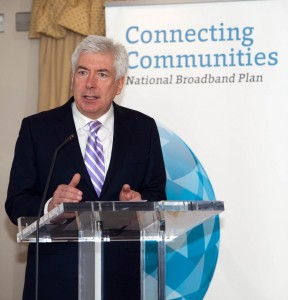 Broadcasting Authority of Ireland’s Minister of Communications, Alex White, and the BAI began to review the plurality of media test soon after the passage of the law, and opened it to media organizations so they could voice their opinions and provide input on the guidelines.

A sustainable, independent media needs supporting institutions—among them, a wide variety of opinions and viewpoints available for public consumption. This includes the question of who owns the media, how they interact with each other, and what happens when one media outlet merges with another. Even in the most functioning democracy, this is an issue as often times, money buys power.

In October 2014, Ireland enacted the Competition and Consumer Protection Act, which includes a section that radically changes the way that media organizations can merge in the country. This Act includes a provision that would require a a substantive test whether or not the media merger would maintain  a plurality of the media in the public interest, though exactly what this test will be was not included in the initial Act, as it is under the jurisdiction of the Broadcasting Authority of Ireland’s Minister of Communications, Alex White. White and the BAI began to review the plurality of media test soon after the passage of the law, and opened it to media organizations so they could voice their opinions and provide input on the guidelines.

The review period ended in late January, and White said that the finalized guidelines will be publicly announced in a few weeks once all comments are corroborated, as there are varied opinions throughout the country.

Reaction to the Act

Because the media aspect of this legislation is a minor piece of the Act, Members of Fianna Fáil, Ireland’s majority party, called the inclusion of media “very odd and slightly suspicious.” Journalist groups in Ireland welcomed the idea of this Act, but expressed frustration that the open period for comments was over the Christmas holiday, and felt that there wasn’t enough time for adequate debate over the provisions in this bill. Freedom House’s Freedom of the Press Ireland scores from 2014

There are certainly downfalls in this debate, but the passage of this bill is a step in the right direction. Ireland has been rated ‘free’ in Freedom House’s Freedom of the Press Survey since its inception, but one of the major issues in the country is the concentration of ownership in the media sector. Though the legislation would not apply retroactively, thus limiting the effectiveness of the Act in fixing the root of the ownership problem in Ireland, it will apply to future mergers.