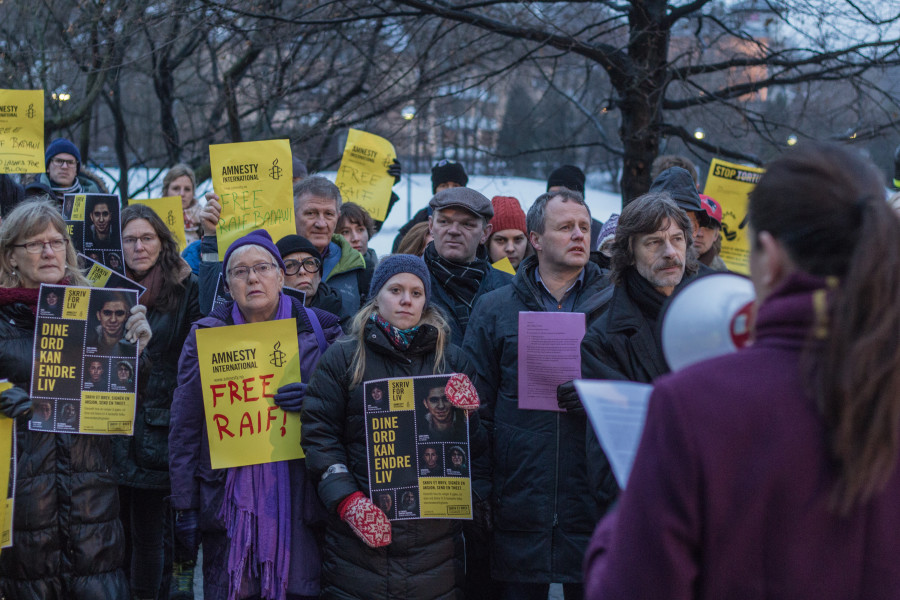 **Update: King Abdullah of Saudi Arabia died on January 22. He will be succeeded by his brother, Crown Prince Salman.  Additionally on January 22, Raif Badawi’s public flogging was postponed for the second week in a row due his worsening medical condition. The international community will continue to monitor the situation as Badawi’s case remains open-ended.

January 2015 started with bad news for the press, as the New Year began with the worst attack against press freedom in the past five years when armed gunmen stormed French satirical magazine Charlie Hebdo’s offices in France. And then things got worse. Just two days later, Saudi blogger Raif Badawi received the first 50 of his 1000 public lashes. The divergence between Hebdo’s seemingly random targeting of journalists provides a stark contrast of the institutionalized targeting of a blogger by the Saudi Arabian government.

Badawi was arrested in 2012 for his criticism of Saudi Arabia’s powerful clerics on his blog, the Free Saudi Liberal Network. He was sentenced to 10 years in prison plus 1000 public lashes. The first 50 lashes occurred on January 9. The next 50 were scheduled to occur last Friday, January 16, but they were delayed due to the fact that he hadn’t completely healed from the first round of lashings.

According to Amnesty International, “Not only does this postponement … expose the utter brutality of this punishment, it underlines its outrageous inhumanity,” said Amnesty’s Said Boumedouha. “The notion that Raif Badawi must be allowed to heal so that he can suffer this cruel punishment again and again is macabre and outrageous.”

Badawi’s case has media outlets and many in the international community speaking out on his behalf. A group of eight U.S. Senators called for his immediate release last Friday. While the United States often calls on repressive countries to uphold human rights values, the government often doesn’t speak out against actions taken by Saudi Arabia due to the strong ties between the two countries. Other Western democracies have called for his immediate release, and media outlets throughout the world have spoken out on his behalf stating that “his crime shouldn’t even be considered a crime.”

Under immense international pressure, King Abdullah’s is said to have taken an “unusual step” and sent the case to the Saudi Arabian Supreme Court for review. It remains to be seen, however, whether or not this will truly have any impact. In the meantime, Badawi remains in imminent danger, however, the next 50 lashings that were scheduled for this Friday were postponed because he remains in poor condition.