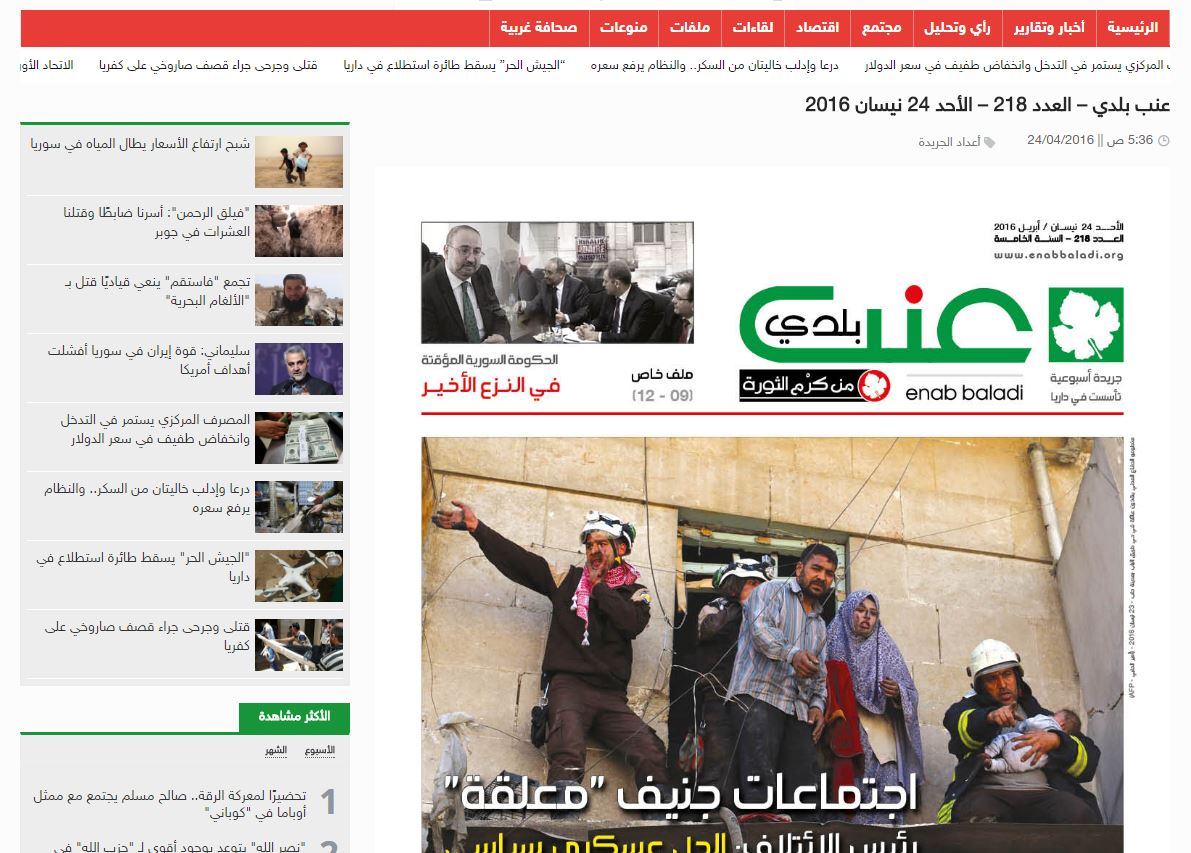 The media environment in Syria is nothing short of complicated given the civil war that has been raging since March 2011. Reporters Without Borders deems Syria the deadliest country in the world for journalists, and the Committee to Protect Journalists has confirmed 94 journalist deaths since the beginning of the conflict.

The Assad regime, infamous for its information control tactics, is continuing to thwart media critical of the government by detaining journalists, all while maintaining its propaganda mouthpiece. The Islamic State, well known for its own propaganda production and advanced use of online media recruitment around the world, targets and executes journalists. While media allied with opposition forces report more objectively than the regime, they too are heavily politicized, which leads them to bias and an inability to be self-critical. But in the midst of war and information polarization exist independent media groups, led by passionate individuals driven by something beyond their own lives—a free Syria.

Although Syria has the constitutional framework for a free press, it has been under martial law since the 1960s, virtually eliminating the free-flow of information. Before 2011, while there were a number of technically skilled individuals within the regime media system that understood the value of independent media, they were constrained by government pressure to produce propaganda. As the Arab Spring movement gained momentum in March 2011, many of the journalists traditionally allied with the regime who tried to push back against government control were killed or fled the country for safety. This led to the rise of citizen journalists, aided by the Internet, mobile technology, and regional experts, to fill the information void.

The first post-conflict publications were started by citizen journalists. Enab Baladi (or Grapes of My Country), a self-described weekly, independent, political, social, cultural, and miscellaneous newspaper, was started in 2011 by a core group of passionate activists. Individuals within Enab Baladi posted stories to social media but also delivered physical newspapers, particularly to areas in which there was no electricity or online access. These young purveyors of information risked their lives to inform the Syrian people. They only missed publication once during a 2012 regime massacre in Darayya, a suburb outside of Damascus, which eventually forced the Enab Baladi leadership to disperse after their office was destroyed.

Despite a lack of training, the individuals behind Enab Baladi had a professional editorial policy and structure defined within the first year. As time has passed, the group has become significantly more professionalized, but their passion for the truth and a free Syria has never faded.

Today, Enab Baladi produces content in a weekly newspaper (7,000 copies) and a website (in Arabic and English). According to its website, Enab Baladi has had 3 million visitors and 4.3 million page views since January 2016, and its Facebook shows 729,187 likes as of May 9, 2016. Despite the civil war and the hardships that have come with it, the newspaper has risen to become a major media contender, garnering attention from internal and external audiences. Enab Baladi, alongside other publications within the Syrian Network for Prints, serves as one of many examples out of the 54 currently active publications indicating the importance of credible storytelling and the changing nature of the Syrian media space.

It is unlikely that the Syrian media space will return to the heavily controlled and monopolized environment that it once was. The challenge going forward is how to ensure the sustainability of these efforts and how to strengthen them. The Syrian civil war will eventually end, so a conversation about the future needs to happen now.

Kristy Densmore is a student at George Washington University pursuing a master’s degree in Security Policy Studies with a focus on non-state actors and risk analysis. She was an intern at CIMA in Spring 2016.

MEDIA AS A FORM OF AID IN HUMANITARIAN CRISES

SYRIA MEDIA SAFETY: PROVIDING A RESOURCE IN A HUMANITARIAN CRISIS

DIGITAL MEDIA IN THE ARAB WORLD ONE YEAR AFTER THE REVOLUTIONS

SOCIAL MEDIA IN THE ARAB WORLD: LEADING UP TO THE UPRISINGS OF 2011