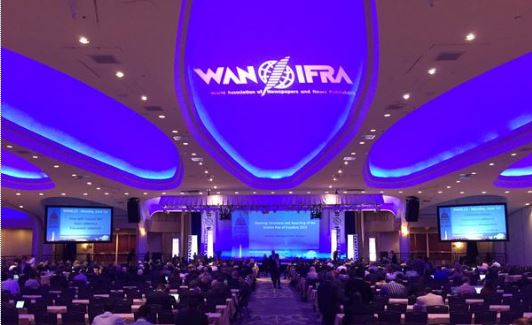 The three-day-plus meeting of the World Association of Newspapers and News Publishers (WAN-IFRA) in Washington this week presented a veritable firehose of information, analysis, opinion, and prognostication about the state and future of the newspaper industry around the world. And by “newspaper industry,” we’re not talking just about print media here, as every speaker throughout the conference made clear.

There was a lot of information to digest, but the key themes emphasized innovation and blowing up the old business model and traditional editorial workflow and doing more–much more–with:

As Larry Kilman, WAN-IFRA’s secretary general put it, “The basic assumption of the news business model–the subsidy that advertisers have long provided to news content–is gone.”

To quote the advice to publishers by one presenter, journalism professor and media analyst Jeff Jarvis, as I did in this tweet:

.@jeffjarvis: become fully digital before print is no longer sustainable. Journalism is a service not a content factory. #wnc15 @CIMA_Media

Lou Ferrara of the Associated Press talked about automating stories–in this case business earnings reports. For a word person, seeing how columns and rows of numbers can automatically become a piece of prose was startling.

Joyce Barnathan, president of the International Center for Journalists, moderated a panel entitled “Into the Future,” looking at the next frontier in technology as it applies to journalism.

New York Times publisher Arthur Sulzberger made the point that his newspaper’s editorial process is no longer geared to concentrating on the front page of the newspaper first. The old Page One news meeting now takes place at 9:30 a.m. and concentrates on the digital report.

Presenting WAN-IFRA’s 2015 Innovation in Newspapers World Report, Juan Señor argued that the model of a multiple-section, compartmentalized newspaper, which has been around for more than a century in the United States and has been emulated in Europe and other parts of the world, is no longer necessary or even desirable. Instead he argued for:

A key to success in the digital/mobile world, Señor said, is to tear down the walls between IT and the newsroom and put journalists, developers, and designers at the same table in the newsroom. At a minimum, he argued, newsrooms should have one developer for every five journalists.

But, he cautioned, “Innovation is not imitation. We are not Google or Facebook.”