The Media is Silenced in Venezuela and Ecuador 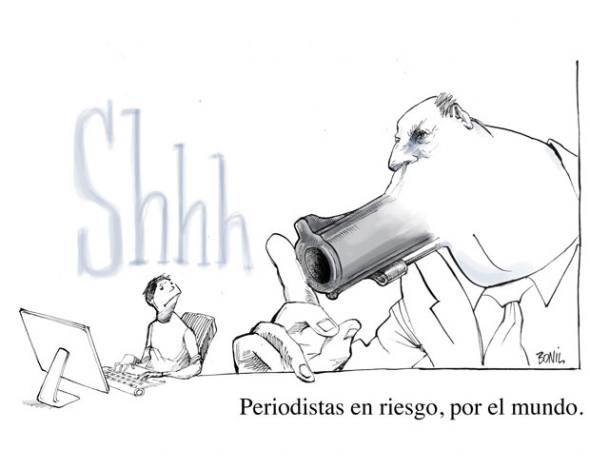 Image by Bonil, for El Universo.

In Ecuador, 254 arbitrary sanctions were made against the press in 2014: that’s a 46 percent increase since 2013, according to data produced by the Ecuadoran organization Fundamedios.  For January and February 2015 alone, 46 new direct attacks have challenged independent media.  The adoption of the Communications Law in 2013 by the administration of President Rafael Correa has given way to increased criminalization of the press.  And with more “reforms” announced for 2015, freedom of expression is at risk of vanishing.  In Ecuador, the media is being silenced, slowly but surely.

In Venezuela, at least 25 traditional media outlets were purchased in the last five years.  Nothing wrong about that, except there is little information available on the selling-buying processes of traditional media outlets–print, radio and television.  What’s more, new ownership of media outlets has resulted in changes in the editorial point of view in favor of the government.  Cartoonists and journalists have lost their jobs.  Investigative journalism has disappeared.  Censorship has become the norm.  This alarming information was revealed by the latest report produced by the Instituto Prensa y Sociedad Venezuela in March 2015.  In Venezuela, the media is being silenced, slowly but surely.

As the Inter-American Commission on Human Rights is celebrating its 154th Period of Sessions, civil society representatives, journalists and cartoonists from across the region have traveled to Washington, DC, this week to raise their voices and condemn the closing of space for media.  At the commission’s sessions, the deterioration of freedom of expression in Latin America has been on everybody’s lips, but these lips are not smiling.  At the Ecuador hearings, commissioners of the Inter-American human rights body lamented the absence of a representative of Ecuador’s government.  The Correa administration has often strongly opposed the Inter-American human rights system.  And while its absence is not surprising, it is a renewed testimony of the government’s lack of interest in promoting and respecting freedom of expression.

The media has been silenced, but civil society, under attack as well, has made its voice heard, despite fear for increased government retaliation.  The government of Venezuela has openly attacked civil society organizations present in Washington.  While the content of the recently adopted Ley Habilitante Anti-imperialista para la Paz (Anti-imperialist Enabling Law for Peace) remains unclear, sanctions against democratic activists are possible.

In this context, it is difficult to find anything to smile about.  As Ecuadoran cartoonist Bonil put it: “Politics and humor have and will always go hand in hand, because humor is a way for citizens to defend themselves from abuses by politicians and power.”  In a discussion convened by Freedom House, Bonil, with Venezuelan cartoonist Rayma, shared their experiences and continued their campaign to raise awareness of the pervasiveness of government censorship in both Venezuela and Ecuador and on the need to find creative ways to challenge restrictions to freedom of expression.  Let’s continue to talk about it.  If the media is silenced, then we should be louder.  Raise your voice for silenced media.