The New Age of Censorship and Intimidation 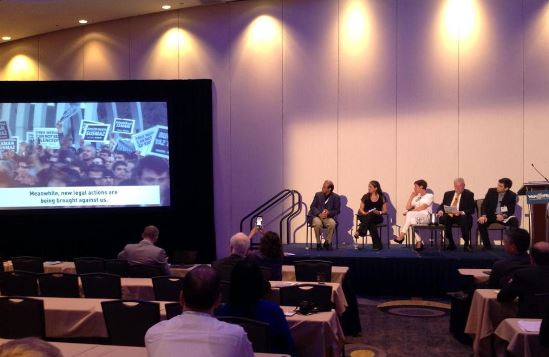 This was the title of a panel I moderated during the WAN-IFRA’s World News media Congress 2015 in Washington DC this week. The panel grew out of an ongoing joint project by CIMA and WAN-IFRA to research and track the spread of “soft censorship,” a topic I’ve been writing about since coming to CIMA nearly seven years ago.

In the paper I wrote about for CIMA in 2009, we defined soft –or indirect – censorship as the practice of influencing news coverage by applying financial pressure on media companies that are considered critical of a government or its policies and rewarding media outlets and individual journalists who are seen as friendly to the government. Examples of this practice abound in countries in every part of the world. It takes several forms:

But as became clear from the presentations of the panelists–journalists from around the world–these new forms of indirect censorship have expanded way beyond using advertising budgets and payments to journalists to put pressure on news media. These include questionable ownership structures, denial of access to infrastructure or necessary resources such as printing paper, and use of taxation or broadcast licensing to punish media.

All the panelists were wonderful speakers who told powerful stories. Here, abridged from the conference program and a planning document for the panel, is a just a glimpse of who these courageous journalists are:

Correspondents covering the Ukraine have been beset by trolls on social media (allegedly by Russians). The extent and detail are frightening, including the spread of  misinformation  and reputation-damaging false commentary, such as that the correspondents are pedophiles. This new form of intimidation has been felt particularly in German newsrooms.

Dumanli was arrested and jailed by the Turkish government last year. He is not allowed to travel and he participated in the panel via a recorded video.

Abbas and his team know what it is to be targeted. The reporters are constantly at risk from bombs and attack. Vulnerable district correspondents in far-flung areas have all but been silenced, with their parent media organizations unable to protect them. Even in the metropolises, a range of threats have made the job of reporting and bringing the news to the public unacceptably dangerous. In several cases, reporting too closely on certain subjects deemed undesirable by non-state and state actors has become a virtual death sentence.

Haffajee is the leading voice on censorship among newspaper editors in South Africa. The media lives under the constant threat of a government media tribunal to keep control of the press. The government uses advertising to reward “good” newspapers as do state led institutions. When she said in a speech that individuals should rise up against censorship, the government called her publisher to complain.

Dessien spoke about issues in across Latin America, including physical intimidation, kidnappings, and commercially driven soft censorship through the carrot of advertising and payments to journalists and the stick of tax and business legislation.

WAN-IFRA has created a website for our project on Soft Censorship, which I encourage you to visit at www.softcensorship.org, and a twitter campaign. You can join the conversation at #SoftCensorship.