The media in Turkey has had a difficult year. Following last December’s corruption scandal human rights and press freedom groups from around the world have condemned the Turkish governments’ actions against the media. In March, Twitter and YouTube  were shuttered following a leaked recording that caused the government to state that social media spreads false information.

Tension between the media and the government continued throughout the year and peaked on December 14th when the government ordered a raid against media outlets viewed to be against the government.  In this raid, 31 people (including several journalists and members of the media) were detained on charges of “establishing, heading, or being a member of a terrorist organization.” 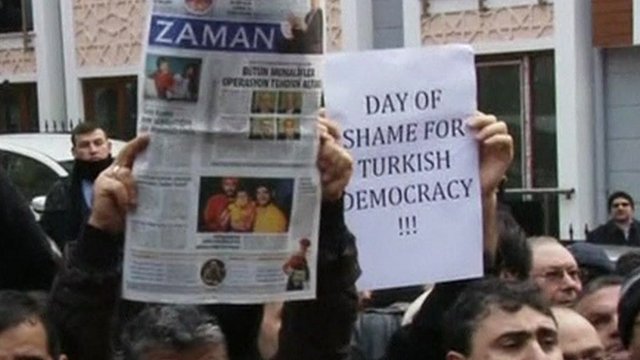 “The operation is directly aimed to punish the journalism organizations who have been critical of President Erdogan and the current government since the December 2013 corruption scandal,” said Deniz Ergürel in an interview with WAN-IFRA. “This is a clear message to any journalist and media organization who may be critical of the government.”

P24 also spoke out against these raids, stating that they “decry this operation that takes aim at the media … who have been involved in publishing files and commentary on corruption since December 17th last year.”

What remains to be seen is how Turkey will proceed. Following the raids, EU foreign policy chief Federica Mohgerini condemned the government’s actions, and Erdogan’s response was that “No one has the authority to meddle in the steps taken by the Turkish security. The EU should keep its opinions to itself.”

Journalists in Turkey cite self-censorship to be among their major concerns as the government is closely tied with many media outlets in the country—and these most recent raids give even greater reason for journalists to fear retaliation for the content they produce. These fears seem to be grounded in the fact that Turkey is consistently ranked in the top 10 countries with the most jailed journalists. In fact, just three days after the raids, the Committee to Protect Journalists released its annual report about jailed journalists. Ironically, Turkey was the most improved country in the world—dropping from the number one “most jailed” position to number 10 with seven journalists behind bars.  While this is far from exemplary (and no longer the case), it’s clear that there is a small ray of hope for the future of the country.

Whether the recent raids were a ploy to avoid organized reporting about the one year anniversary of last year’s corruption scandal or a broader attempt to control the media, the international community will enter another year with all eyes on Turkey, hoping for the best but curious to see what the government will do next.