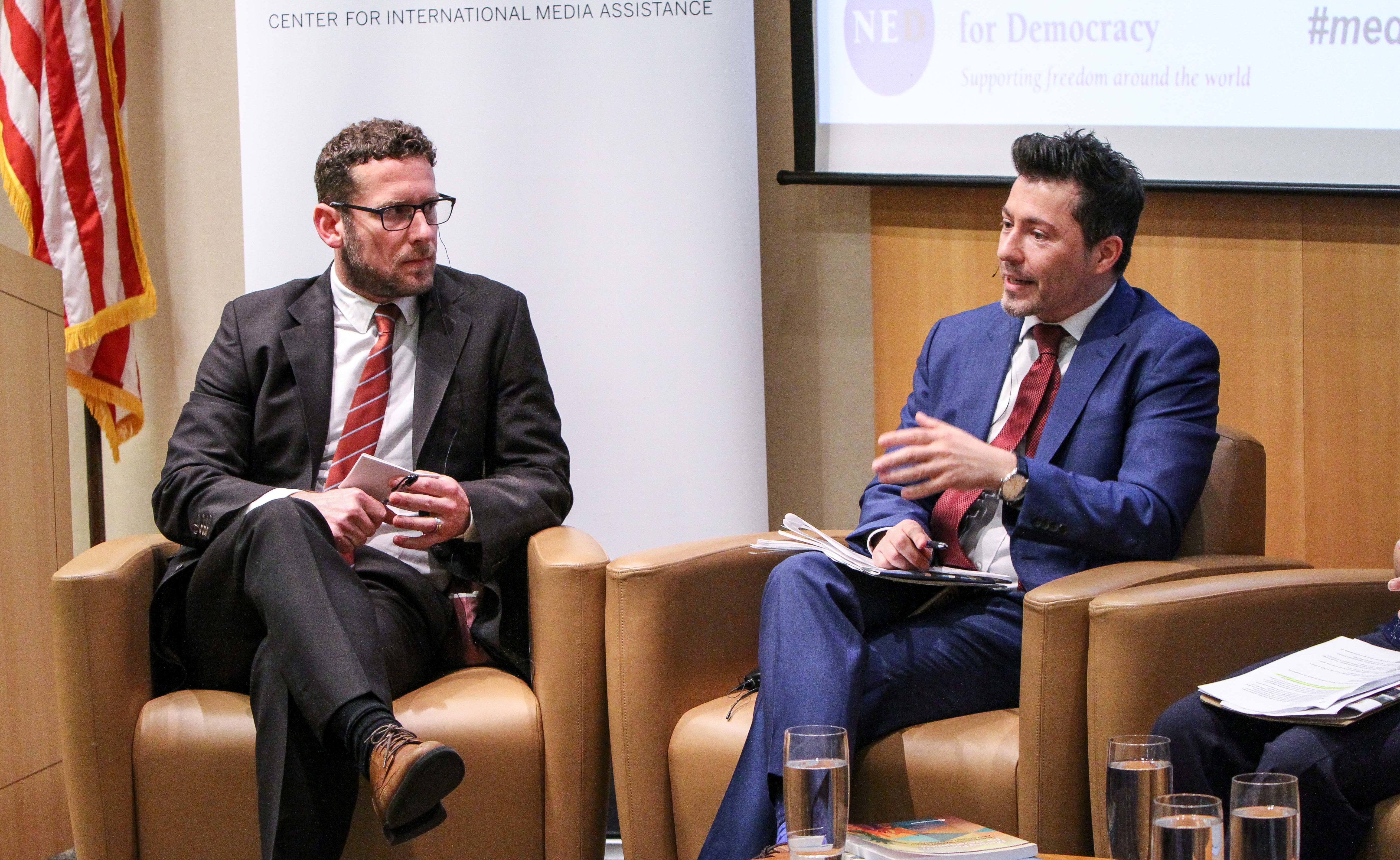 On Tuesday, May 23, CIMA hosted a discussion on Media and Civic Engagement: From Protests to Dialogue. From left: Nicholas Benequista, Marco Larizza

By Nicholas Benequista and Kate Musgrave

Those who provide support to the development of media around the world have occupied a special, and quite separate, field within the broader realm of international development, and have worked largely in the shadow of larger governance concerns. But that may be changing.

CIMA’s panel event on Media and Civic Engagement: From Protests to Dialogue highlighted some of the indications that media development is gaining attention. In January 2017, for instance, the World Bank released its flagship publication, the World Development Report, on Governance and the Law. The report has been described as a “landmark” acknowledgement by the World Bank of the importance of politics to development.

But in addition to its remarkable recognition that elections, political parties, public forums, and citizen groups are essential institutions, the 2017 World Development Report also gave unprecedented attention to the role of the media in enabling these institutions to function. Marco Larizza, a senior public sector specialist at the World Bank and one of the core authors of this year’s World Development Report, spoke at the event at the National Endowment for Democracy about why media is so essential to other pillars of governance.

“What we try to say [in the WDR] is that there are actually ways in which change is possible. Even in the short term, countries can adapt, and citizens play a role in that and they have different channels. The media are strongly connected to this process… the media can help in all three entry points: changing incentives, reshaping preferences, and reducing barriers of entry for actors or issues.”

The nod from the World Bank to the importance of a robust and vibrant media system is just the latest indication that actors in the broader realm of governance and development view media as a factor of growing importance for social, economic, and political outcomes. The Organization for Economic Co-Operation and Development, the Organization of American States, and UNESCO, among other major international groups, have brought attention recently to how the fundamental challenges to  media systems pose fundamental challenges to governance and democracy.

Naomi Hossain, a research fellow at the Institute of Development Studies who has spent the last decade researching the social and political responses to economic shocks of the financial crisis and food prices spikes that began around 2008, came to the unexpected conclusion in her own work that media, and particularly news journalism, played a critical and often constructive role in shaping those responses.

“This is getting more and more important in a more globalized, more complex world,” Hossain said, speaking on the panel with Larizza. “We need journalists who are going to be able to make those connections, to look at those complex patterns and figure out, tell a story, tell a narrative.”

Within the niche field of support to media development, actors are likewise beginning to look for broader partnerships and to set objectives that are closer aligned with governance and development goals. IREX’s recently reformed strategy on vibrant information for just, prosperous and inclusive societies is an example of this.

The vibrant information strategy unveiled by IREX moves away from supporting media as a monolithic sector. IREX previously identified four pillars in its media development strategy: laws and regulatory norms, journalistic professionalism, supporting institutions and business management. This approach viewed media outlets as the primary recipients of media development. But with professional and important content now being produced by many different actors and the blurring of the lines between media producers and the audience, IREX is focused much more broadly on the determinants of health civic dialogue, including how citizens engage and act on the information and stories they see. Tara Susman-Peña, senior technical advisor at IREX, explained why IREX revisited its strategy now.

“Why did we do this now? We felt that with so much going on right now in the world in terms of incredible technological transformation, with a lot going in the wrong direction in terms of economic and political norms, it was time to take a look at our holistic media sector approach that we developed in the 1990s after the fall of the Soviet Union.”

To be sure, while high-level reports, research and strategies may increasingly recognize the inevitable need to better integrate media development into a broader governance and development paradigm, few spaces exist yet for this integration to occur – either internationally or nationally. Donors have not yet taken meaningful steps to ensure that knowledge on media issues is mainstreamed into their governance or development programs, and few major international institutions help those working in the media sector to connect with broader reform and governance agendas. So while media development may indeed have received spotlight, you might say that we are still waiting for it to be given a stage.