Will Statisticians Get the Last Word on the UN’s New Development Goals? 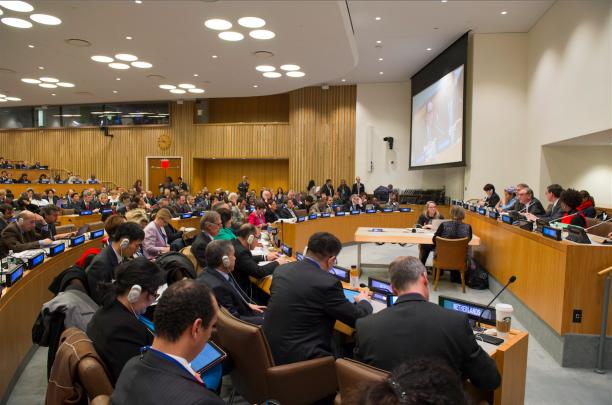 A meeting of the 46th session of the United Nations Statistical Commission, March 3, 2015. The UN body is the final arbiter of the next set of development goals’ indicators and targets.

There are three things you need to know about the negotiations over the United Nations’ next set of global development goals, which will be adopted by world leaders at the General Assembly this September and remain in effect for the next 15 years:

So, if you care about these new goals, pay close attention to the statisticians.

The UN Statistical Commission held its annual meeting last week, with discussions dominated by the measurement challenges of the post-2015 development agenda. The General Assembly designated the Statistical Commission the ultimate arbiter of the indicators for the SDGs and their many specific targets, taking into consideration the monitoring proposals of UN specialists and data advisers.

Why does this matter? Aren’t these just generally accepted official UN numbers?

It’s not that simple. Take the topic of women’s rights, for example, the focus of proposed Goal 5: “Achieve gender equality and empower all women and girls.”

Is a meaningful measurement of women’s “empowerment” the percentage of women in parliament, without taking into account whether those parliaments exercise actual budgetary and policymaking power, or whether women have leadership positions in those that do? Should an official measure of gender-equal access to health care include women’s real-life access to safe birth-control options? If so, how can that be assessed for data-reporting purposes, including in countries that restrict such access? And who tracks all this on a global level?

There are many such examples, where the specificity of selected indicators could determine the long-term policy impact of the respective goals and indicators.

This is perhaps nowhere more true than in the hotly debated but now generally accepted Goal 16 on peace, justice and governance, which includes targets in areas ranging from reducing criminal and political violence (Target 16.1) to guaranteeing public access to information (Target 16.10).

Proposed indicators for Target 16.1 (“Significantly reduce all forms of violence and related death rates everywhere”) include national homicide rates, which are already collated and published annually by the UN Office on Drugs and Crime. Yet even these seemingly straightforward statistics can be questioned. Should the figures include people killed in armed conflict or terrorist attacks, if reliable estimates are available? Countries have different practices. There is no consistent global standard for comparative purposes.

As one UN Office on Drugs and Crime expert noted last week, the 2,606 victims of the 9/11 terror attacks on New York’s Twin Towers were not counted in the city’s 2001 homicide statistics, yet they were certainly homicides by any accepted UN definition of the term.

Indicators measuring access to information are equally complex, technically and politically. Should compliance be construed narrowly, as an obligation on governments to disclose basic budgetary and socioeconomic data? Or should adherence to this target require legally guaranteed public access to most government-maintained information, plus the necessary press freedom and Internet-connectivity conditions for this information to be widely disseminated, discussed and — when merited — challenged?

These are public policy questions, not just technical or computational issues.

Access to safe drinking water is a current development goal most likely to be embedded in future goals. Here, a Burkina Faso village drilled for water through a project led by the United Nations Development Program with money from Japan.

For UN member states, the choice of indicators for the SDGs is a major policy decision, with long-term consequences, nationally and globally. But it is not a decision that they want to make in the speechmaking forums of the General Assembly.

The UN Statistical Commission agreed at its meeting last week to create a new member-state working group on possible indicators for Goal 16. Called the Praia Group on Governance Statistics, after Cape Verde’s capital, it will hold its first deliberations in that equatorial beach town sometime in the next few months.

Though the Commission is assisted by a small secretariat in the Department of Economic and Social Affairs (the UN Statistics Division), it is not a UN “division” or agency, as it is often misperceived. It is a General Assembly advisory body on UN statistical matters, comprised of the heads of UN members’ national statistical institutes. It convenes once a year, with invited participation from UN agencies with data responsibilities, such as Unesco for education statistics and the World Health Organization for public health information. The Commission’s data policy recommendations are conveyed to the UN through the Economic and Social Council.

The Commission’s mandate, then, is as much political as it is technical.

Its members are often displeased by internationally “harmonized” UN indicators for their countries, which they consider inaccurate or outdated. This included some of the data used to measure progress in the Millennium Development Goals. They have voiced that displeasure to UN agencies and the UN Secretariat, using all available diplomatic channels.

Given the much wider scope of the SDGs, many member states have made it known that they are wary of ceding broader measurement authority to UN technocrats. Yet there is also recognition that it is both unwise and impractical for politicians to micromanage such official data-collecting exercises.

Policymakers need to let the development data specialists change and refine these development indicators to reflect inherently unpredictable new realities, a lesson learned from the Millennium Development Goals. An example: One indicator for Goal 8 is the percentage of households with landline telephones, a reasonable national development measure in 2000 but irrelevant today.

They should also authorize the designated international data agencies to supplement statistical reporting with what the Commission terms “expert reviews” — analytical contextual reports that are already produced by the UN in areas ranging from climate change to armed conflict to human rights. As one statistician noted last week, “Not everything that counts can be counted, and not everything that is counted actually counts.”

The first real indication of the Commission’s preferences for SDG indicators will come on March 18, when the Commission will deliver a provisional set of recommended indicators to the General Assembly. Those recommendations will provide a point of reference for the Assembly’s debate on SDG goals and targets the following week, from March 23-27. These will draw heavily on proposals submitted by UN and academic experts through “virtual” consultations led by the UN Development Program, the UN Department of Economic and Social Affairs (DESA) and the Sustainable Development Solutions Network, set up by the economist and UN adviser Jeffrey Sachs. But many details of these UN data proposals differ.

The next institutional step for UN number-crunchers is forming a new Interagency and Expert Group (IAEG) on SDG indicators, under the Commission’s supervision, which will be asked to deliver final recommendations by the end of the year. These indicators would be retroactively endorsed by the Commission first and then by the General Assembly in 2016 — or so goes the plan.

To further complicate matters, national data agencies picked by the Commission and UN staff specialists in the new IAEG and the five UN regional economic commissions — and other players to be named later — will together create something called the High-Level Group for Partnership, Coordination and Capacity-Building for Post-2015 Monitoring. This group will also report annually to the Commission, which will in turn organize a new biennial World Forum on Sustainable Development Data, starting next year, to digest and discuss all this — and perhaps recommend additional UN data committees and conferences and acronyms.

This stereotypically byzantine UN structure of overlapping and largely unfunded mandates will nonetheless have to rise to the occasion — collectively and effectively — for the Sustainable Development Goals to be achieved. Even if not everything that counts can be counted, what the UN statisticians are asked to count will still count a lot.

This article originally appeared on GFMD on March 9, 2015. This is the second in a series on the Sustainable Development Goals. The first article examined the proposed Governance Goal.