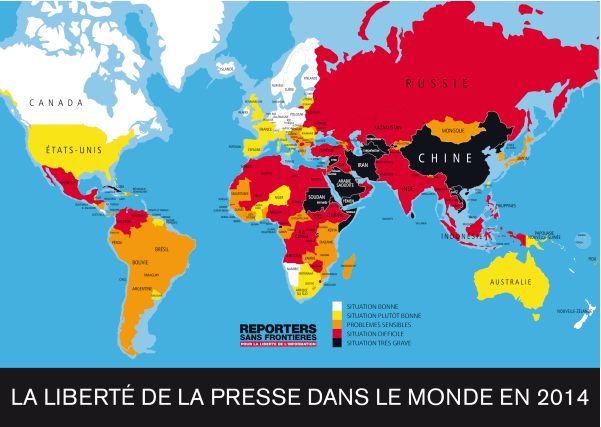 Reporters Without Borders released its 2014 World Press Freedom Index this week, and as is often the case with the release of such indexes, it reopened the conversation about their validity, methodology, and cultural bias.

This year the index, which ranks 180 countries according to six criteria, finds that overall violations of press freedom worldwide increased by 1.8 percent.

The press release for the report offers this pithy indication of the state of things:

The same trio of Finland, Netherlands and Norway heads the index again, while Turkmenistan, North Korea and Eritrea continue to be the biggest information black holes, again occupying the last three positions.

A look at the perennial top-rated countries offers some food for thought for media developers and media support groups. The report says:

The models of respect for media freedom are in northern Europe. Finland, Norway and the Netherlands have led the index for years. Their success rests on solid constitutional and legal foundations, which in turn are based on a real culture of individual freedoms …

This would indicate that to support media freedom one should first support constitutional and legal norms that foster an environment in which independent media can flourish. It raises the question: Should media development efforts be geared more in the direction of support for the legal enabling environment, even if this comes at the expense of traditional media development programs such as training of journalists? And if so, what are the ways and means to make this happen?

And then there is the question of how Reporters Without Borders ranks press freedom in the United States: In this year’s report, it was downgraded 13 places to 46th overall–just behind Romania and Papua New Guinea and well behind Namibia. The reasons cited? The Obama administration’s pursuit of whistleblowers and reporters’ sources, in particular the NSA surveillance revealed by Edward Snowden and the Justice Department’s seizure of the Associated Press’s phone records.

For U.S. media development workers trying to spread the gospel of good journalism and independent media in the Global South, such public reminders of problems for news media at home are unlikely to make life any easier.