A Road-map for Meaningful Media Reform in Ethiopia 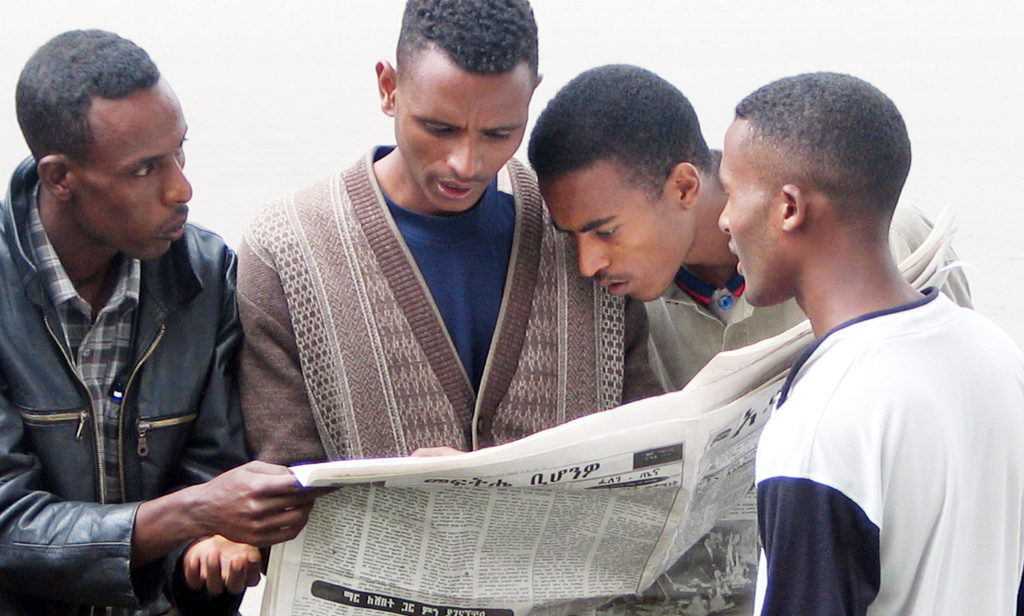 Reading the newspaper in Addis Ababa. Cropped photo by Terje Skjerdal (CC BY 2.0)

The rapid political opening in Ethiopia over the past year has seen an uptick in journalistic freedom and a sincere effort on the part of the government to foster a robust, independent, and diverse media sphere. To continue this progress, reforms efforts must work to undo the legacies of authoritarianism.

In this blog, I will explore the fault lines that challenge media reform in Ethiopia and provide recommendations for how the Ethiopian government, civil society, and international partners can take steps to mitigate those risks, moving toward robust, independent media in Ethiopia.

Threats to the Information Environment in Ethiopia

Before Ethiopia’s transition, draconian laws curbed freedom of expression, the government held de facto control of the supposedly independent journalist association, and the state had captured the means of media production.  The last several months have brought promising changes. A coalition of civil society leaders, academics, and government officials is reviewing draft media laws, and in the meantime, the government is not applying the old, restrictive laws. Private media is growing and becoming less dependent on state controlled production.  However, to create a free and vibrant media, more needs to be done to encourage the expansion of media freedom and protect newfound space against backsliding.  Repressive laws remain on the books, jeopardizing progress should the transition process hit a road bump.  Additionally, the existing journalism council has not been active for some time and is largely obsolete. The country needs a journalism association that can fulfill an independent watchdog role and set best practices, which is why a new group of this nature needs to be created. Moreover, private media remains frail. To illustrate the severity of the situation, one need only point out that there are more than 100 million people in Ethiopia, but there is no daily private newspaper.

The past authoritarian media system and its vestiges have driven the proliferation and consumption of disinformation and misinformation. Historically unreliable, propagandist state media steered Ethiopians to find alternative news sources, while at the same time, outsized state control of the information space meant alternatives were rare. These realities persist, leaving Ethiopians to derive their news from social media and other questionable sources, where disinformation and misinformation fuel ethnic tension and violence. While the impacts of this are palpable and in some cases, deadly, the origins and motivations are unclear. Going forward, private and state run media should be equipped to combat false narratives by providing citizens unbiased, truthful information.

These issues undermine media’s ability to tackle its unique role during the transition period. There is minimal communication between media and institutions important to the transition. Since taking power in April 2018, Prime Minister Abiy Ahmed has held only one press conference.  Vast swaths of the population have limited access to information because of private media’s limited capacity. This is complicated by the spread of misinformation and disinformation, which some media outlets engage in disseminating. Fact-based, easily accessible reporting is especially critical given that the political opening has not come without retribution–violence has driven displacement and the destruction of property across several regions. A full picture of the state of the country would help address the problems arising from the transition.

Much work remains to ensure that media can play its role in this delicate transition period and strengthen democracy in Ethiopia. Meaningful media reform will require all concerned bodies to collaborate, but it is also important that stakeholders play distinct roles. A true road-map will invariably require negotiation and course correction along the way, but I have outlined some of the necessary steps each party can take to achieve the goals of the transition.

The media working group, established by the Prime Minister and housed under the Advisory Council for Legal & Justice Affairs, is a welcome fist stop along the road to reform with the potential to facilitate these recommendations. However, the group’s capacity may be insufficient for the scope of its directives. Comprised of fifteen volunteer academics, legal practitioners, journalists, and government representatives, the working group is tasked with producing a comprehensive diagnostic report on the sector, reviewing around thirty laws that impact Ethiopia’s media landscape, and proposing new laws. The enormity of this mandate has already hindered the group’s progress; the initial deadline for the draft mass media law was pushed back. This is not a reflection of the group’s capability, but the scale of the challenge. Given how critical the media will be to progressing and sustaining Ethiopia’s transition, the media reform process must be more concerted, better resourced, and more sustainable.

The international community can play a key role in realizing this goal, but should understand that its most valuable contribution would be to support Ethiopians in determining their own pathway to media reform. International partners can do this by encouraging and supporting broad dialogue and consultation among independent journalists, freedom of expression activists, human right defenders, and broadcast authority officials. External expertise is also welcome so long as our international partners recognize that no off-the-shelf blueprint will work. A successful road-map must recognize that the journey is as important as the destination.

Asmamaw Gizaw is a journalist and independent researcher from Ethiopia. His research focuses on media pluralism, freedom of expression and cyber-activism & security