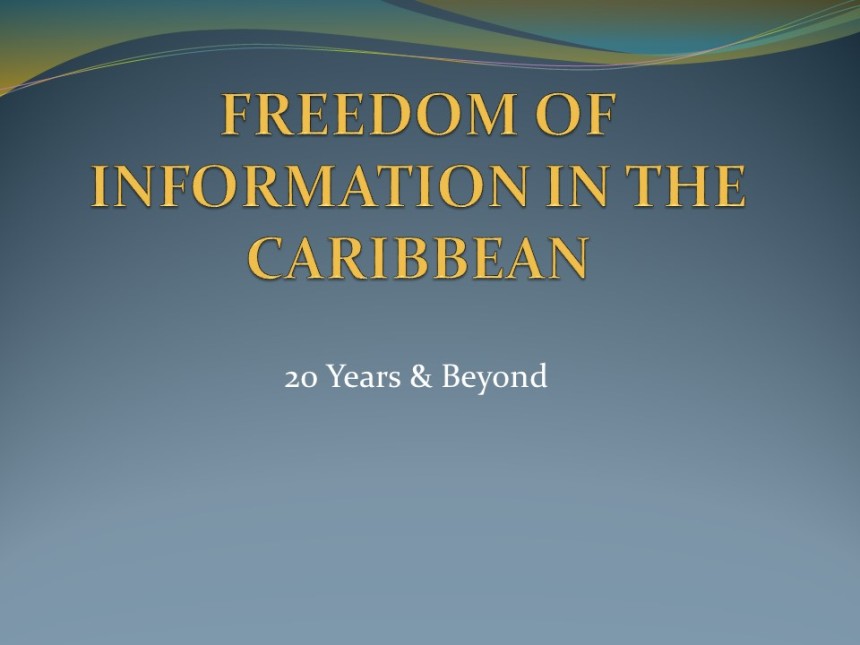 From Livingstone's World Bank presentation: Freedom of Information in the Caribbean.

The Caribbean has caught up with the global trend that now counts more than 100 countries with Freedom of Information (FOI) laws. Over the past 20 years, the majority of the 20 member states of the Caribbean Community (CARICOM) are now at various stages of implementation of FOI laws and policies. Of  these, eight have enacted laws (Belize, Trinidad and Tobago, Jamaica, St. Vincent, Antigua, Cayman Islands, Bermuda, Guyana); five have drafted bills (the Bahamas, Barbados, Grenada, St. Kitts, St. Lucia) and seven have no laws at all (Montserrat, Dominica, Suriname, Haiti, Turks and Caicos, Anguilla, British Virgin Islands).

Seven of the eight countries that have enacted FOI laws have operationalized them, establishing compliance mechanisms such as: an FOI Commissioner (Antigua, Cayman Islands, Guyana), a dual function Ombudsman (Belize, Trinidad and Tobago), and an Appeal Tribunal with no enforcement powers (Jamaica). In St. Vincent, all appeals go directly to the High Court.

Only Jamaica has “whistleblower” legislation, passed only recently. Trinidad, St. Vincent, Bahamas, and Barbados have enacted data protection laws, while St. Kitts, St. Lucia, and the Cayman Islands are in the process of drafting or enacting them. The Official Secrets Act in all of these countries, despite its incongruence with FOI, has yet to be repealed.

Under the Global RTI Rating (2013), the laws of Jamaica, Trinidad, Belize, St. Vincent, and Guyana all occupy the middle to lower end percentile (though there is a bright spot: Antigua’s law is in the upper percentile). Overall, there are issues with the scope of the laws, clarity/affordability of requesting procedures, narrowness of exemptions, accessibility of the appeals process, effectiveness of sanctions, and legally required promotional measures. Since an FOI law lays the groundwork for an open democratic regime, the rating, except for Antigua’s, is undoubtedly discouraging.

It is well documented—and all too readily apparent to anyone who has worked with legislation—that a law may be a draftsman’s dream and yet is not worth the paper on which it is written.

Antigua’s law, one of the better ones, falls into that category. As recently as 2013, the Information Commissioner complained about the lack of resources for his office and too few information officers. Note that this law was enacted in 2004.

Yet despite a weak law, if the enforcement mechanism is effective, and the administration of the law is consistent, that law can still bring value to the public. The Cayman Islands’ law, while similar to Jamaica’s, provides for an Information Commissioner with strong powers, much like Antigua’s. The similarities end there however, as the Cayman Commissioner’s responsiveness to complaints and appeals has resulted in far greater public use since occupying the post in 2009. The commissioner’s 2013 Annual Report indicates that the number and complexity of appeals grew from 2009 to 2013, when public bodies received 2,901 applications (population: 58,435). Investigative journalism benefited tremendously, with granted requests forming the basis of many news stories. All of this, according to the report, is testament to the high level of awareness of the law, both within government and the wider population.

Except for a few success stories, implementation in the other six countries has been spotty and beset by the usual suspects: inadequate budgets, infrequent training, outdated websites, weak records and information management, a protracted legislative process … all pointing to administrative neglect or  failure.

Having talked FOI laws and regimes to death, I offer  a few points for local, regional, and international NGOs to consider for adoption if we are to change the trajectory of Caribbean FOI:

We will explore these further in my next post.